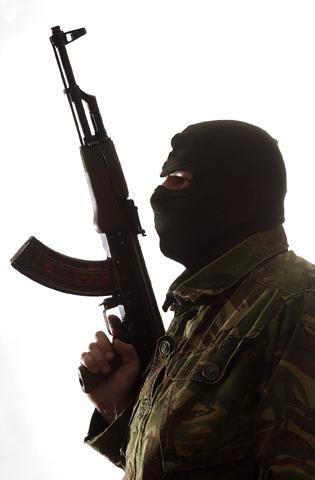 Reports revealed that facts of the case are that on 11th
July , 2004 S.I Raghubir Singh SHO PS Bani alongwith Nafri was on search
operation in area of Lowang Tehsil Bani District Kathua. During search
operation information received that some unknown Militants armed with deadly
weapons are hiding in lowang area of Tehsil Bani.

On this  the area of
village Mora Swiftly cordoned and the militants
namely Raj Din and Hussan Din
arrested and from their possession 2 AK-47 rifles alongwith 8 Magazines,
2 Chinese grenades and 240  live
cartridges of AK-47 rifle recovered. In this regard a case FIR No. 49/2004 U/S
121/121-A RPC, 7/25 Arms Act was registered at Police Station Bani.

Meanwhile, armed terrorists struck and killed one Hasina
Bano, candidate for Panchyat elections from Char-i-sherif of cental Kashmir’s
Budgam district. Eye witness revealed that total 9 people entered in the house
of slain during midnight and three unidentified armed terrorists showered
bullets upon her, leaving her in pool of blood. It is first political killing
during panchyat polls. Earlier, separatists had given call for boycott to panchyat
polls.