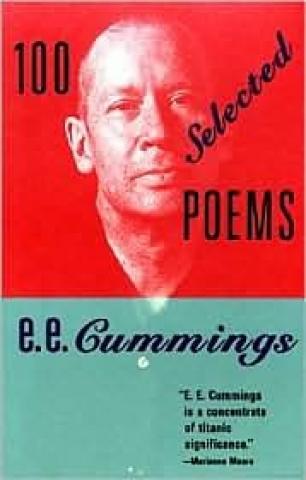 It’s a pleasure to write about e. e. cummings, as it is to read him. (And I believe, as is obvious, in never capitalizing his name. It’s like putting "God" in lower case.) The extravagant praise on the back of this book, by Marianne Moore, John Dos Passos, Randall Jarrell, Karl Shapiro, is notably defensive, as if one must apologize for liking cummings — the way one makes excuses for cherishing Madonna. And there is a definite "pop music" to e. e.: tender strains of love, and adolescent revolt, swell in his lyrics. His "hits" are unforgettable, like the Rolling Stones’, and his non-hits pretty forgettable. But one loves his unfamous poems, too, for their signature semi-humor. They are funny, but not hopelessly funny — not "comedy." cummings invented a nearly-light verse which no one else can do (though Ferlinghetti wore the shoes he discarded).

I say no world

can hold a you

shall see the not

is one beginning that I opened to. (Number 63.) (I admire the numerical titles of all these poems.) Politically, e. e. saw the million dangers of the American empire, already in "1 X 1" (a book he wrote in 1944).

Filed under: Media & Tech
Share Tweet Pin G Plus Email
previous article: River that plays truant -Borra caves area
next article: ResumeEdge Offers Five Ways to Capitalize on Your Skills on Your Resume and Beyond