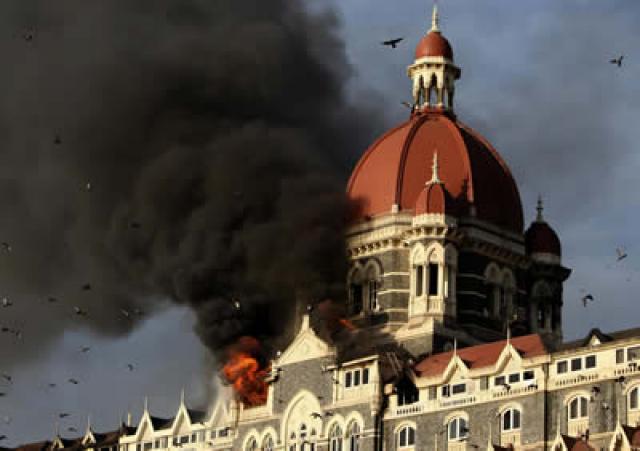 A group calling itself the "Deccan Mujahedeen" claimed responsibility for the attacks late Wednesday night on the Taj Mahal and Oberoi Trident hotels, and eight other locations, including the main train station, a hospital and an up-market restaurant.

Maharashtra state’s Director General of Police AN Roy said around 100 people were killed in the precisely targeted assaults by small groups of gunmen armed with AK-47s and grenades that began around 10:30pm.

Some foreign tourists were reported to be among the dead.

Witnesses said the gunmen had specifically chosen US and British citizens to take hostage.

Frequent bursts gunfire in and around the two five star hotels continued to be heard on Thursday morning.

The head of Mumbai’s Anti-Terrorism Squad, Hemant Karkare, was one of at least 11 security personnel killed in the shootouts.

Another siege was in progress at Nariman House, an office building that houses a Jewish centre. The chairman of the Indian Jewish Federation, Jonathan Solomon, said a rabbi and his family was being held inside by gunmen.

Army commandos stormed the Taj hotel in the early hours of the morning, apparently leading to the release of some guests inside , with television footage showing people being shepherded out of the building.

Shortly afterwards, the upper floors of the landmark hotel became engulfed in flames.

Police said two gunmen were shot dead, but two more were still believed to be holed up inside the hotel. Explosions and gunfire were still being heard at 9:00am.

Fire engines were brought in to rescue trapped guests through their windows.

"We have one man who has a bullet wound in his stomach," one woman told a TV channel by phone from a room where she was hunkered down with around 35 other guests.

There was also a standoff at the Oberoi Trident hotel, where at least two gunmen were believed to be holding out with around half-a-dozen hostages.

Firing was also reported at Cama Hospital in south Mumbai, and three people were reported killed in what police called a "bomb blast" in a taxi in the southeast of the city.

One British guest at the Taj, Rakesh Patel, said he had been among a dozen people herded together by two heavily armed men and taken up to the hotel’s upper floors.

"They were very young, like boys really, wearing jeans and T-shirts," the guest said.

"They said they wanted anyone with British and American passports and then they took us up the stairs. I think they wanted to take us to the roof," he said, adding that he and another hostage managed to escape on the 18th floor.

British businessman Alex Chamberlain told the Sky network that similar national profiling had been conducted by the gunmen in the Oberoi.

"They told everybody to stop and put their hands up and asked if there were any British or Americans. My friend said to me, ‘don’t be a hero, don’t say you are British’," Chamberlain said.

One Japanese was among the dead, the foreign ministry in Tokyo said, while at least two Australians were injured.

The United States and Britain led global condemnation , with Washington describing the attacks as "horrific", and US president-elect Barack Obama pledging to work with India to "root out and destroy terrorist networks".

Britain’s Prime Minister Gordon Brown said the "outrageous" attacks would be met with a "vigorous response".

India has witnessed a wave of coordinated attacks in recent months.

Six weeks earlier, the capital New Delhi had been hit by a series of bombs in crowded markets that left more than 20 dead. Those blasts were claimed by a group calling itself the Indian Mujahedeen.