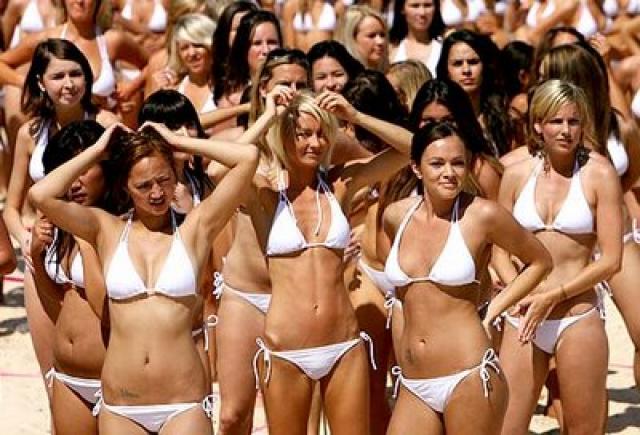 A TOTAL of 1010 bikini-clad women made history at Bondi yesterday, where they set a world record with the largest swimsuit photo shoot ever.

Guinness World Records representative, Chris Sheedy said the shoot was ”one of the more spectacular world records” he had been invited to adjudicate.

”As an Australian myself, it’s logical that any record involving sun, sand and surf should be held in this country,” he said.

”I imagine it will be quite an effort to better the mark set by Cosmopolitan at Bondi’s world-famous beach but we throw the challenge out to other countries around the world, to outdo this precedent-setter.”

The shoot will appear in the January issue of Cosmopolitan, on sale Monday December 3, and will also feature in the next edition of the Guinness World Records book, out in September 2008.

”We’re blown away by the response we’ve had to the Cosmopolitan and Venus Breeze Biggest Ever Swimwear Shoot, and are enormously proud to be world-record breakers!”, said Sarah Wilson, editor of Cosmopolitan.

”The record-breaking shoot highlighted the zest for life that Australian women have: we love a challenge, were not afraid to show our bodies, we love the beach and we dont take ourselves too seriously,” Wilson said.

Best described as Baywatch meets Beach Blanket Bingo, the scene on the sand yesterday included 15 roving lifesavers recruited to apply sunscreen to 1,000 bikini babes who were ogled by countless surfers, locals and tourists who must have been surprised by the popularity of a mid-morning weekday dip.

Bondi lifeguards turned their ocean-front headquarters into a dressing room to allow each women to change into her bikini.

The skimpy swimwear made its debut in 1946. Hoping it would be worn by beautiful "bombshells", the designers named it after Bikini Atoll, an atomic bomb test site in the Marshall Islands.

The bikini shoot will be featured in a double gatefold insert in the January issue of Cosmopolitan.

The event was organised as a promotion between Cosmopolitan Magazine and Gillette.

A blend of 100 paid models and many more volunteers — mostly more interested in the free $120 goody bag than the notion of creating history — gathered in the sun.

With 23C temperatures and blue skies, the event kicked off Sydney‘s beach season in grand style.

Hundreds of women tried out Gillette’s most convenient shave yet – the new Venus Breeze razor – in the Venus Breeze tent and a sun-safety squad spread the word about skin-protection at the event, which formed part of ACP Magazine’s 30 Days of Fashion and Beauty celebrations.