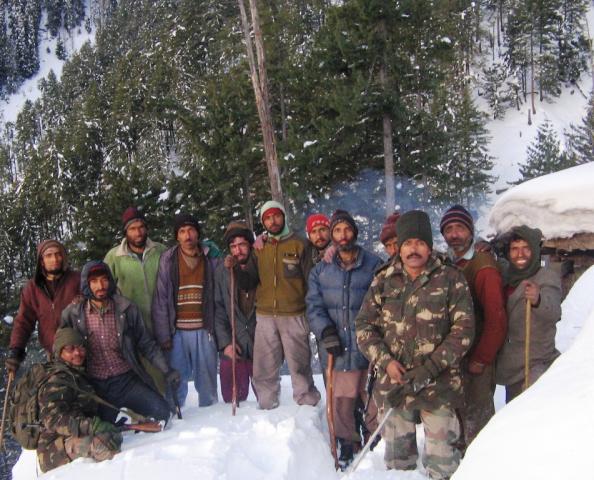 According to official sources that on the night of 22nd Jan 2012, at 8.20 pm Commanding Officer of 8 Rashtriya Rifles Colnal Abdul Hamid Khan received an SOS call from DC, Doda that 11 workers of PHE Department belonging to village Al,  had moved to upper reaches of Alkanda region during the day for repair of water supply system, were trapped in snow.

He said that the workers somehow managed to pass information to their department. This thickly forested area is known to be avalanche prone and their immediate evacuation was necessary to save their lives.

DC Doda therefore immediately contacted the local Army Unit. Col Khan ordered move of 20 men from nearest post at Udyanpur who left at 8.45 pm along with a nursing assistant and emergency life saving medicines. They also carried rescue equipment, warm clothes and packaged food for the trapped persons. After walking for more than 7 hours in the chest deep snow, with the help of ropes, the team finally reached the site at 4.00 am. They found 5 of the trapped workers in extremely critical condition due to the cold effect.

The team immediately took control of the situation, took out the workers, lighted the fire and gave them first aid. They also provided them warm clothes. Tea and food was also served to them. After an effort of two hours the workers resuscitated and were brought out of danger zone. On daybreak the army men supported these workers through the snow and brought them to village Al where they were received by the large crowd of villagers.

Farooq Ahmad Khan, DC Doda appreciated the efforts of 8 RR for speedy and timely assistance for the rescue operation and in turn saving 11 precious lives.