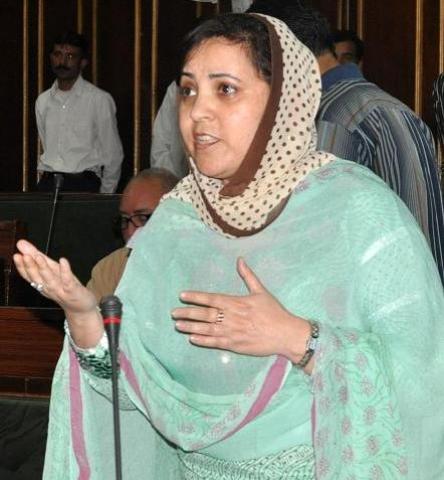 Jammu, March 16 (Scoop News) – Minister for Social Welfare, Ms Sakina Itoo has said that under National Family benefit Scheme one time financial assistance of Rs 10,000 is being provided to those BPL families whose primary bread earner has expired, adding that during last two fiscals and current financial year 125 families of Mendhar constituency have been provided financial assistance @ Rs 10,000 per family under the scheme.

This was stated by Minister while replying to a question by  S. Rafiq Hussain Khan in the Legislative Assembly here today.

Minister said that 2416 pension cases of old age, widow and physically handicapped persons of Mendhar constituency are pending for disposal and would be cleared as and when the funds are available.

Replying to another question by Ch. Sukhnandan regarding upliftment of Gujjar community, the Minister informed the House that there are few families residing alongside river bed area near Chinore Farm. She said special schemes exist for the welfare of Gujjar and Bakarwals community. She said scholarship is being provided to all the students of the community under district plan to TSP and article 275

She said the plan proposal for construction of various works in Gujjar and Bakarwal habitations is being formulated in consultation with the members of the State and district Advisory Board and MLA concerned.

The Minister said that during current fiscal an amount of Rs 39.96 lakh and Rs 35.68 lakhs have been released under SCA to TSP and article 275 respectively. She said that no work of Chinore area exists in the said action plan. However, she assured that while formulating the next action plan under these schemes due consideration would be given to the said area.