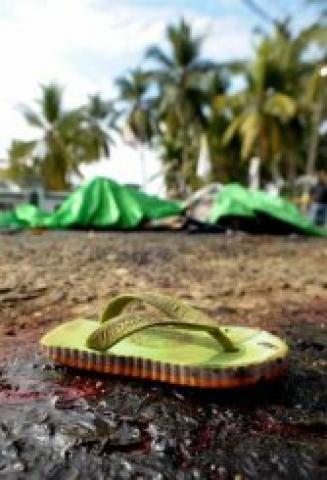 Fifteen people were killed and another 60, including a government minister, wounded on Tuesday in a suicide bombing at a Muslim celebration in Sri Lanka, officials said.

Military spokesman Udaya Nanayakkara blamed the Liberation Tigers of Tamil Eelam (LTTE) for the attack. "It is an LTTE suicide bombing," he said.

No group has yet claimed responsibility for the attack.

The bombing targeted politicians attending a ceremony at a mosque in the town of Akuressa and came as the Tigers steadily lost ground in the face of a fierce government offensive on their shrinking northeastern stronghold.

Postal Services Minister Mahinda Wijesekera underwent a four-hour surgery after he was airlifted to the main medical facility in Colombo after suffering a head injury, hospital director Hector Weerasinghe said.

Four local politicians were among those killed in the blast carried out by a male suicide bomber, the military spokesman said.

Culture Minister Mahinda Yapa Abeywardene, who was initially listed as injured, said the blood splattered on his clothes came from other victims and that he was unhurt.

"We were walking in a procession and just passing the entrance to the mosque when there was a blast. I thought it was a big firecracker," Abeywardene told AFP.

"My clothes were covered in blood and I started running. Later I realised that I was not hurt, but I had blood from someone who was hit in the blast."

Muslim men were playing hand drums and performing a dance when the bomber detonated the explosives in Akuressa, 160 kilometres (100 miles) south of Colombo, witnesses said.

"We had just cleared the main entrance for VIPs when the blast went off," Chandrasiri Gajadeera, one of the politicians present, said. "I fell on the ground and was taken away by a security guard."

There were large crowds at the ceremony, held on a national holiday marking the Milad-un-Nabi festival, the birthday of the Prophet Mohammed.

The blast came as President Mahinda Rajapakse told the country’s minority Muslim community that the celebrations in Akuressa were of national importance.

"The Muslims of Sri Lanka will have greater joy in these celebrations this year…," the President said in his message delivered just before the attack. The government said the bombing only strengthened its resolve to finish off the Tigers, who are cornered in the northeast of the island.

Although no group has claimed responsibility, the Tigers carried out an attack similar to today’s strike in April 2008, which killed a government minister as he took part in celebrations ahead of the traditional New Year.

The pro-rebel Tamilnet website instead reported that at least 129 civilians had been killed and 200 others wounded in army shelling of the remaining LTTE-controlled territory on Tuesday, a charge denied by the military.

The government insists it is trying to protect civilians and accuses the Tigers of using them as "human shields."

Military officials said heavy fighting continued in the conflict zone after 250 rebels were killed over the weekend.

Sri Lankan authorities ban most journalists and aid workers from the entire north, meaning such claims and counter-claims cannot be verified.

Two years ago, the Tigers — who have a long and bloody record of suicide attacks — controlled large swathes of the north and east of this South Asian island, but have suffered a series of major setbacks.

The government withdrew from a Norwegian-brokered truce at the beginning of last year after accusing the Tigers of using the peace process to re-arm.

Sri Lanka’s president has since resisted calls for another truce, saying his troops had the upper hand and were about to end a conflict that has dragged on since 1972.