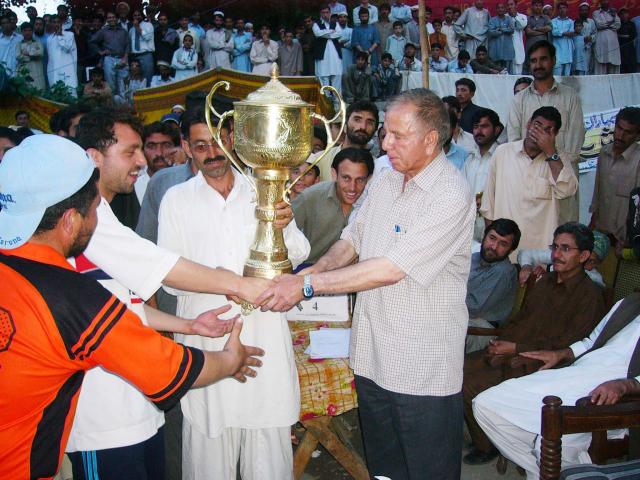 CHITRAL:  The first Shahzada Muhayuddin spring festival (Jishni Baharaa) Cricket tournament concluded at parade ground Chitral Former Federal Minister of State, Former District Nazim and Member National Assembly Shahzada Muhayuddin was chief guest on the occasion. The tournament was started on April 14, 2008 some 62 teams participated in the tournament. The final match was contested between Goldor A Team versus Malgari Club Cricket Team Chitral. The tournament was organized by Sport youth Wing Chitral. During the final match Malgari Club defeated Goldor A team winning by 7 wickets target was 140 runs in total 20 over. Shahzada Muhayuddin MNA from Chitral was chief guest on the occasion. In this connection a simple function was also held. Prominent commentator Dawood Iqbal presented welcome address. He demanded that there is no stadium for the youth of Chitral nor any public play ground. He also demanded for establishment of a sports academy to train and encourage players of the area because no player from Chitral was selected in national team. Quota for fewer than 19 was shifted to Dir instead of Chitral. He also thanked PESCO Chitral for providing them free electricity.

Addressing to the ceremony MNA Chitral Shahzada Muhayuddin assured the youth that their genuine demands will be fulfilled very soon. He said during my tenure as District Nazim of Chitral some 14 million were allocated  for construction of stadium but purchase of land was not allowed in that amounts which were spent for other developmental projects. He said if the government stable in the country as a result Chitral will also develop. He announced for continuation and completion of uplift schemes launched by President Musharaf in Chitral. He said more than 30 billion were allocated by president Musharaf for different developmental projects at Chitral. He advised the young generation to not forget benefactions of President Musharaf. He announced rupees 5000 for winner team, 3000 for runner up team 5000 for management committee.  Ziaullah Khan was declared man of the match while Sadiqullah man of the tournament, Sahibzada announced as best batsman of the tournament, Islahuddin best baler Shaheen sports seenlasht was declared best team of the tournament.  At last the chief guest MNA Chitral awarded winning trophy to Atiqur Rehman Caption of winner team and Cup to Amjad Farid captain of runner up team. A large number of spectators were present in the ground.