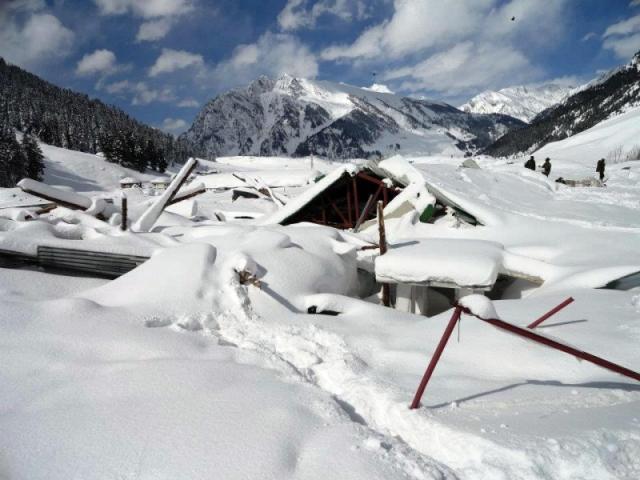 The avalanche damaged around 25 army vehicles and 17 barracks, inside the Brigade workshop. Rescue operations were launched jointly by the Army, Police and Civil authorities and eleven dead bodies and five injured had been recovered till the reports last came in. The injured have been admitted at SDH Dawar. There is however, no civilian casualty, reported.

In addition to the efforts of the Army, the civil administration deployed one Snow clearance machine of Mechanical Engineering Department and also requisitioned machinery from HCC, in order to supplement the rescue efforts. Sub Divisional Magistrate, Gurez and his team are personally associated with Army in rescue operations. However, heavy snow is causing hindrance in the rescue operations.

A teen aged  girl (name with held) resident of Yarikah, Budgam, falling under the jurisdiction of police station Khansahib, consumed some poisonous substance at her home. She was rushed to SMHS Hospital, Srinagar. Police has  registered a case  in this regard.

In a similar incident one girl (name with held) aged 20 years resident of Rathsuna, Budgam, consumed some  poisonous substance to commit suicide. The girl has been shifted to hospital for treatment. A case has been registered in this regard.

Srinagar, February 24: Following complaints of alleged molestation and an attempt to outrage the modesty of a girl, Police station Yaripora has registered a case of against one Mohammad Altaf Dar son of Mohammad Abdullah resident of Chanapora-Yaripora. Further, investigations are on.

Two employees of Sonamarg Development Authorities (Watch of ward staff) stationed at Sonamarg, who had  left towards  Gagangeer have  returned  are missing. Efforts are on to trace out them.

A Maruti Car bearing registration number JK01J/1939 turned turtle near Zazina, Ganderbal, resulting in injuries to Shaheena wife of Nisar Ahmad Malik resident of Benhama Lar, Ganderbal. The injured was shifted to hospital for treatment. A case has been registered in this regard.

In a similar incident,  a passenger vehicle bearing registration number JK03/2964 turned turtle at Tongpawa, Anantnag, falling under the jurisdiction of police station Kokernag, resulting in injuries to six passenger who were boarding in the vehicle. The injured were shifted to hospital for treatment. A case has been registered in this regard.