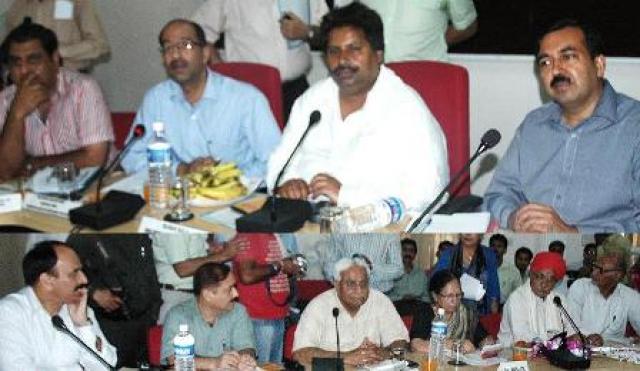 , September 23 (Vijay Kumar) – On the instruction of Chief Minister, Omar Abdullah an apex body was constituted for purpose of monitoring return of Kashmiri Pandit migrants to Kashmir Valley, for which Rs 1618 crore Prime Minister’s Package was already announced.

Today except three members of Panun Kashmir and two members Jitender Bakshi and C.L. Vishav who were indisposed all other 30 members attended the apex committee meeting which met under the Chairmanship of Minister for Revenue, Raman Bhalla.

It was since 1990 when apex committee of Kashmiri Pandit migrated from the valley, met first time where out of 35 members, 30 attended the meeting which proves seriousness of majority of representatives of the Kashmiri pandits to return to the valley so that the highest ever relief package of Rs 1618 crore by Prime Minister’s Dr. Manmohan Singh for the migrants is implemented in letter and spirit and the migrant pandit are able to live among their Muslim brethren in the valley with all facilities and convenience.

The Prime Minister has already in his package announced Rs. 7.5 lakh financial assistance to any family which will undertake renovation/reconstruction of their houses located in the valley. They will be given accommodation by the government till they complete their re-construction of their houses. In case any family would like to stay in their chosen rented accommodation, the rent will be reimbursed by the government.

The package has also allowed different families who have sold their houses to farm cooperative societies and accordingly each member family of the society will be given financial assistance of Rs 7.5 lakh for purchasing the land and constructing the house.

The Prime Minister in his package has also announced 6000 government jobs for Kashmiri pandits in the valley, out of which 3000 will be given by State government out of available vacancies and salaries of other 3000 will be born by the Central government initially.

All the Kashmiri pandit migrants who will return to the valley will continue to get the relief for 2 years as per already announced package. Their children will also be given monthly stipend. The package also provides relief for those migrant pandits who have Horticulture and Agriculture land and desire to revive the same. They will be given 1.50 lakh for the purpose. Those migrants who have raised the loan prior to 1989 shall be given interest waiver facility.

The committee constituted by the government shall monitor implementation of all these schemes and shall also take appropriate measures in this direction. The committee after deliberating shall also put forward further suggestions and recommendation which it will deem fit for the smooth return of Kashmiri pandits to the valley.

The meeting deliberated successfully and the entire participant members were of the view that the time has come to implement the package for those of the KP’s who desire to return to the valley.

Raman Bhalla assures the members that keeping in view the seriousness of Prime Minister of India, Dr. Manmohan Singh and Chief Minister of J&K, Omar Abdullah and majority of the people of valley no time should be wasted for ensuring honorable return of Pandits to the valley.

There is a sizeable percentage of the displaced people who have sold their houses and land in . For many it has been a distress sale.They built houses or purchased flats not only in but in different states in the country.It won’t be possible for them to return to when they know that they cannot purchase plots and build houses for Rs.7.50 lakhs. Besides this a number of Pandit organisations  continue to prefer a homeland within the valley where they could lead a secured and dignified life.But the Government is not in favour of the homeland demand as it fears that this may result in segregation of the  two main communities which could violate the basic secular character  of the state.

A large number of the displaced people are of the opinion that the security scenario had not yet improved to the extent that displaced people could be ensured risk free living.They say that security situation continues to fluctuate and nothing definite can be said about it when in recent weeks the rate of infiltration from across the LOC has gone up and so has the level of violence.

But the Government seems to be determined to implement the package even if less than 40 per cent of the displaced people are ready to accept the offer.The Revenue Minister,Raman Bhalla has said that the Government survey has revealed that over 14,000 displaced youth were unemployed.He said "if on one hand several leaders have opposed to join the deliberations on the return scheme over 13500 Pandit unemployed youths had,in writing,conveyed their desire to accept the package"  The Relief Commissioner,Vinod Koul,said that "we plan to provide jobs to over 15,000 displaced youths but these jobs can be given to them only in the valley.He and Bhalla said that once these 13500 youths accept the Government jobs in the valley it would be the beginning of the  return process.

Bhalla said that the Government has constituted a 32-member apex committee and "we have given representation to leaders belonging to all the Pandit bodies." He said if the Pandit leaders continue to adopt rigid stand "we will take leaders of various organisations in the migrant camps on the committee."