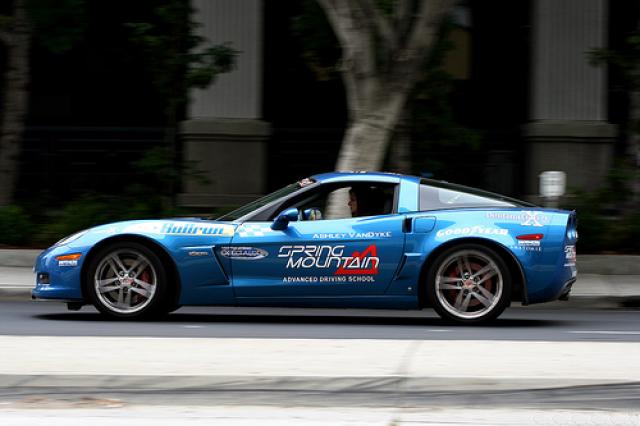 Ashley began her Bullrun adventure in Las Vegas, Nevada on a more-than-average Tuesday. She joined the rest of the Bullrun gang after their

long haul halfway across the country, all the way from Calgary, Canada. She was driving for the Destination X TV team, in her suitably sexy blue

Corvette Z06 – all decaled up and ready for the road race in hand. Her co-pilot, navigator and professional racecar driver back-up would be trusted friend, Spencer Sharp. There were two other Corvette Z06s for a couple legs, driven by Robert from Luxury Toy Club, and JB from The

Industry TV show. Meanwhile, Bill Wu took his Hummer trick- machine and joined the fun as well. Finally in our crew, the Destination X TV media Jeep, driven by me, Dallas Tanner and others along for the ride. Leaving Las Vegas at the Wynn Hotel, with little sleep and all the adrenaline you could imagine, we headed over to Spring Mountain Motorsports; Ashley’s personal sponsor and Destination X TV’s very good friends.

On this perfect three-mile racetrack, everyone tested what their incredible supercars could do, as a shakedown. There was a delicious buffet and a huge outdoor sauna; perfect to enjoy the wonderful desert weather – at 110F. I’m sure this was for everyone to detox from the night before! Ashley and the Bullrunners spent a couple hours on track, while Bill Wu and his companions in the Hummer tried to figure out their over-

heating issues. The next route took Ashley and the Bullrunners through Death Valley, to the centre of the world, ha ha… Beverly Hills. We were all a little concerned, because the temperatures were hitting up to 120F. Our buddies from Streetfire.net were cruising around with their topless orange Cobra; a beautiful car, but not at all desert-weather friendly. Hope they had sun block on! Richard Rawlings from Garage Monkey Garage had the worst luck in his Escalade-powered Chevy Caprice, with a fuel line leak and overheating. But here is why the Bullrun has the reputation it does – Richard got his tow truck guy to get his car on a bulky flatbed truck and nail it at 85mph down the highway! Unbelievable!

Once in Beverly Hills, Ashley and the Bullrunners went out for a splendid dinner and hobbled over to the 944 Magazine party on Sunset Boulevard, where there was tons of press, new friends to meet, celebrities galore and a line all the way down the street… Quite a hype!

In early Wednesday morning, everyone gathered at the front of the Sofitel Hotel, where the car paparazzi captured photos of the action, including the cops. Ashley and the gang then rallied over to Westcoast Customs in Pomona, Califonia, where we were given first-class treatment with a home-style barbeque and tour. From there, Ashley burnt rubber in her Z06, but the smoke award went to Bill Wu in his Hummer with its smoke- screen exhaust. This blasted black smoke out of the rear of the truck to dirty up and blind the person behind. Mad! Following this, Ashley decided to step-up the pace, and push it to P1. Our Jeep and its crew were scattered around in the dust behind, with not a hope of keeping up with the race ace. At 2:00pm, Ashley was scheduled to do a radio interview for KGKI Radio in Florida. The interview was going smoothly until Ashley noticed a cop approaching quickly in the rearview mirror, lights flashing. “Hey, I’m getting pulled over. I gotta go…” she sighed, while bringing her Corvette to the side of the freeway. “No! You gotta stay on the air…” the presenter screamed. “Ladies and gentlemen, Ashley Van Dyke is getting pulled over on the I-10 in Arizona live, this is Bullrun action, baby! Ashley, hang in there, this is priceless.” The officer approached her window slowly and demanded she “Turn off the engine and step out of the vehicle.” Ashley naturally obeyed, and walked out the car, defenceless. The cop came on swift: “Ma’am put your hands behind your back, we are placing you under arrest.” Ashley’s heart sank; no more licence, no more rallies. She was placed in the back of the female cop’s car for a grueling 30-minute grilling, with no air-conditioning, in 110F heat.

Unable to stand the immense heat any longer, Ashley calmly asked the police officer if she could stand outside, assuring her that she wouldn’t run. “We need backup here,” the cop radioed and soon there was a

After extensive blabbing, Ashley was able to get the police officer to understand that her car was perfectly road- legal. And, adter an hour and a half, the officer finally decided to let her go – with an excessive

speeding ticket fine of $650 and a mandatory court appearance in Arizona. At least it made good radio!

Following that debacle, the excitement got greater, as the Arizona police were now alerted to Bullrunners tearing through the state. Larry from Team Fortress in the Audi R8 was reportedly taken to jail that

day. We all thought he claimed some sort of record – five speeding tickets in 36 hours! Yes, it was ‘hot’ out there, with helicopters and unmarked cars all over. Cops were turning off their lasers so no one could detect them. It had become a war; us versus them, and we were risking it all – money, cars, licensees, or worse, jail. Now sticking to speed limits, Ashley made it to the next check point in Scottsdale, Arizona. As soon as route cards were handed out, everyone jumped in their cars and pulled away fast, so the Destination X TV Jeep skipped the checkpoint to try and keep up. But soon the cops were

everywhere, and waiting! This is when Ashley got pulled over for her second time that day. The officer was just wasting time. He started questioning Ashley about having a Nevada dealer plate. He called for backup, as they always do, and his sergeant appeared on the scene. “There’s a Hummer with army patterns all over it, he drawled. They’re filming this event, but we’ve the right to seize the vehicle and all cameras, tapes, computers and any other technology that’s in it. You guys better watch it because that’s not the only one we’re taking!” Using all her (plentiful!) feminine charm, Ashley managed to talk her way out of the situation and, as soon as she was back on the road she called Bill Wu in his Hummer. “They’re gonna take your Hummer and all of our equipment,” she explained. “You gotta pull over and take off all the decals.” So Bill took the next route off the freeway and went directly to the Indian Reservations… as the police had no jurisdiction there. Bill and his crew then ripped off all the $7000 army- style decals. They then did some clever navigating and took fire roads all the way to the Tucson Loew’s Resort, the final checkpoint of the day.

When they got there, everyone crowded around the Hummer and celebrated, covering the crew from head to tow in beer and champagne. This started a huge pool party on the penultimate night.. But the last day was even more fun. We didn’t have much to worry about when it came to the legal system, as we all took a dirt trail for 23 miles to our next checkpoint. One team in their $300,000 Aston Martin loved this. With rocks and dust, the route was like a rally stage, but it kept us out of trouble. Finally, after seven days, countless cop encounters and crossing seven states and thousands of miles, we arrived at Firebird Raceway, for some ontrack excitement. Temperatures were still outrageous and overheating

was still an issue. But we all had fun blasting – legally fast – around the circuit, many of us spinning out, blowing off steam.

After such an epic few days, to celebrate in true Bullrun style, Ashley and the other Bullrunners all headed off to the pool and the Valley Ho in Scottsdale, for some serious R&R, and a bit of a special

partay: The town of Scottsdale had closed the main street for

a huge celebration for all the warriors who made it to the finishline. It was quite a night. Now of course, everyone wants to know, what’s the 2009 route?