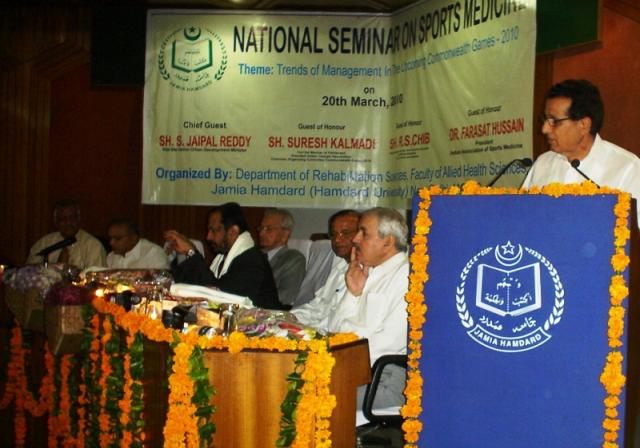 Jammu/New Delhi, March 20 (Scoop News) – J&K  Minister for Technical Education, Youth Services & Sports, R. S. Chib today said that in a view of Commonwealth Games, the year 2010 is going to be a landmark year for sports and sports medicine in . He complimented the Vice Chancellor of Jamia Hamdard, Dr. G. N. Qazi for taking a lead from the rest of country to bring all essionals related to different fields of specialties on a common platform by organizing such an event in the national capital.

J&K Minister Chib was addressing an inaugural function of one day seminar on Sports Medicine with the theme “Trends of management in India in view of Common Wealth Games 2010” organized by Jamia Hamdard at Jamia Hamdard University Campusin New Delhi on Saturday. The Union Minister for Urban Development,  Jaipal Reddy was the Chief Guest while  Suresh Kalmandi, Member Parliament and Chairman, Common Wealth Games 2010 Organizing Committee was the Guest of Honor.

Chib appreciated the bold steps taken by Chief Minister of J&K, Omar Abdullah to augment the field of sports in the state. J&K is witnessing the construction of sports stadia and record number of sports activities. He also appealed Union Minister for Health,  Ghulam Nabi Azad for constituting physiotherapy council through introduction of a bill in the Parliament on the same lines as other Medical Council and Engineering Council have been constituted. He hoped that under astute stewardship of  Azad , this bill will prove as  a landmark to underscore the importance of physiotherapy as sports medicine.

“The conference will enable various essionals to discuss and devise  strategies for preventing sports related injuries and steps to provide prudent, and immediate treatment for soft tissue injuries”,  Chib said that various assessments and exercise training protocols being discussed will help the essionals to cope with the advance strategies in athletic training.

“Due to evolution of Physiotherapy into different specialties in these years like Neurology, Orthopedics, Sports Medicine, Cardiothoracic, Gynecology and Pediatrics, seminars of this nature would go a long way in assisting the wide field of sports medicine”, the Minister said .

Chib emphasized that  Government has taken radical steps in understanding the importance of Physiotherapy and its role to prevent disabilities. He informed the audience that presently the state has come out with a proposal of task force. The Minister said that the government has also made a proposal for youth clubs and submitted to Chief Minister,  Omar Abdullah. It is pertinent to mention here that Jammu and Kashmir Health Department has also come out with a proposal for creation of posts for Physiotherapists in every district and sub-district hospital of the state.

While appreciating the idea of framing the Physiotherapy Council Bill, on the lines of Medical Council of India, the Minister said that this will help physiotherapy ession to come up in a better way.

Later, the Minister said that  is marching ahead keeping in view the goal set by late Jenab Abdul Hakim founder of this great university.