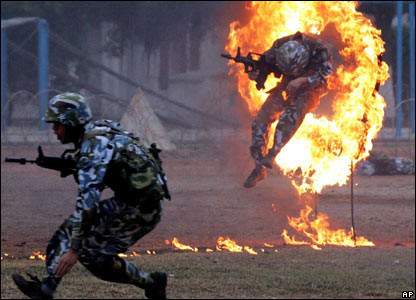 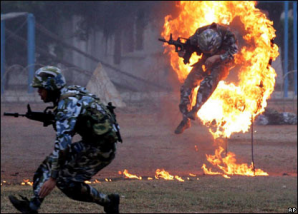 Chinese soldiers go through a grueling obstacle course to mimic the conditions of actual combat  in Beijing, China in 2012.

The Department of Defense released its latest annual report to Congress on Chinese military capabilities called: Military and Security Developments involving the People’s Republic of China 2012 that caught a lot of people’s attention for good reason.

China today has one of the largest and fastest growing military programs in the world.

It noted that on March 4, 2012, Beijing announced an “11.2 percent increase in its annual military budget to roughly $106 billion.”

This increase continues more than two decades of sustained annual increases in China’s announced military budget. Analysis of 2000-2011 data indicates China’s disclosed military budget grew at an average of “11.8 percent per year in inflation-adjusted terms over the period”, according to the report.

The report notes that the Chinese Navy primarily focuses on improving anti-air and anti-surface warfare capabilities, as well as developing a credible “at-sea nuclear deterrent”, including submarine launch ballistic missiles (SLBMs) capable of hitting targets at distances upwards to 5000 miles away.

There has also been significant development of Chinese Air Force, the report notes, including advancements in  of Stealth aircraft technology.

China also continues to build the Bei- Dou (Compass) navigation satellite constellation with the goal of establishing a regional network by the end of 2012 and a global network by 2020.

In terms of espionage – Chinese actors are considered the world’s most active and persistent perpetrators, especially in the area of economic espionage. Stealing basically everything in sight.