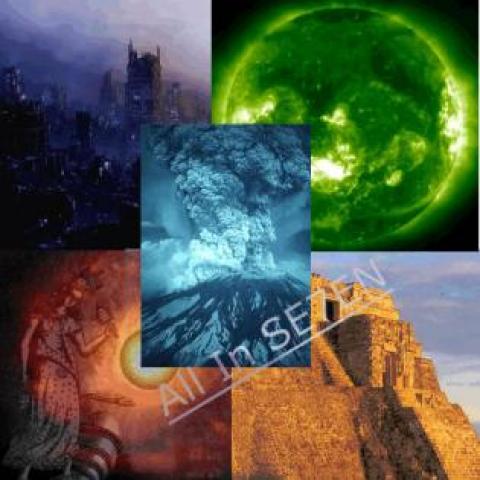 According to various religions, beliefs and scientists end of the world such as we know it is coming. How exactly will happen, nobody can say definitely. Also rather speculate and time will come the end of the world.

1. Mayan Calendar
Maya vanished ancient Central American civilization. The study of their past know that they had very accurate calendar. Their estimates for the duration of the year differ by only 34 seconds of today’s calculations. According to their calendar, the end of the world will occur on December 21, 2012, when it will happen a unique astronomical phenomenon that happens once every few tens of thousands of years.

2. Solar Storms
Astronomers, experts watching the sun made it startling discovery: our sun is at a time of strong solar activity. Output energy of the Sun, like most things in nature is cyclical and should be in the middle of a period of relative stability. But a series of solar eruptions bombard the earth with so much radiation energy, solar panels that ruining the satellites. This activity is increasing and is expected to be its peak in 2012, with likely radiation have detrimental effects on life on Earth.

3. Strong Soil Activity
Recently ground activity is growing steadily. Happen more often devastating earthquakes of very deadly Tsunami waves. Many dormant volcanoes began to awaken from their age-old dream. Some scientists foresee a recent global cataclysm in which the outbreak of the Super Vulcan is very likely. Scientists suggest that the volcano in Yellowstone will S.A.SHT. Where there are signs of rising tension. It also predicts a result of strong ground activity even part of the emergence of land in the Pacific Ocean and formation of a new continent. However, some parts of today’s land will end up underwater.

4. Earth’s Magnetic Field
We all know that Earth is surrounded by a magnetic field that protects us from cosmic radiation, mainly from solar radiation. What you might not know is that the magnetic poles of this field happened to be exchanged. Scientists have observed in recent years, weakening the magnetic field and movement of the poles by about 20-30km per year, much faster than it was. This could mean that the change at the poles may be the case. During the exchange itself, the magnetic field is switched off, and then the Earth will be subjected to deadly radiation, while magnetic field is not included. Nobody can determine the period of absence of magnetic field. As long as he is, the less chance there will be about survival.

5. Religions
If it is not enough to impress the statements of some scientists, some researchers will complete religious apocalyptic picture. Interpretations of the Bible says that Armageddon – the battle between good and evil will happen in 2012. Similar passages can be found in the Chinese book of changes, also in the Hindu teachings. Indeed, almost every religion contains descriptions of apocalyptic images related to the end of the world.
It remains only expect to see that all these predictions will happen, or is just another fraud with unclear purpose.

Filed under: Health & Science, World
Share Tweet Pin G Plus Email
previous article: BJP will not allow Govt to get away with their anti- people & anti- national politics
next article: Leh-Srinagar road to reopen for heavy vehicles on April 22