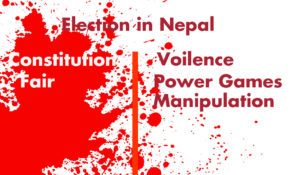 Nepal Government is in full preparation to go ahead with the new Constituent Assembly (CA) elections schedule to be held on 19 November.  According to the Election Commission of Nepal, there has been a drop in the number of registered voters from 17.5 million in 2008 elections to 12.3 million this year.

While the electoral campaign is being marked by a huge number of candidates approximately 6,000 of 122 political parties against 54 in the first CA elections in 2008, the election is attracting a lot of violence and externalities.

With a twist, the 33 other political parties led by Mohan Baidya of the Communist Party of Nepal-Maoist (CPN-Maoist) are against the election and have expressed their dissatisfaction in terms of the government and time frame. Time and again they have expressed clearly that they will retaliate with full force and action if their voices are sidelined.

Highlighting, the pressure of the approaching election for CA, different security forces are high in alert. On Thursday a pressure-cooker bomb was found at Kathmandu’s Kandaghari on the evening.

According to the police, “A pressure cooker bomb was found planted at road-side drainage near Birendra Chowk of Kandaghari. The bomb had a sign of “danger” painted on the wall beside the drainage.”

The bomb was disposed by the bomb disposal squad of the Nepal Army (NA).

A bomb that was targeted Nepali Congress Vice-president and Tanahun constituency No-2 candidate Ramchandra Paudel  exploded yesterday night at a house in Rapatar of Ramjakot-2. Though no human casualty was reported, Paudel’s vehicle was damaged. Police found four unexploded improvised petrol bombs near the site.

Similarly situation tensioned after a bomb was found at Dharmachowk in Bharatpur-5, early today morning. The NA bomb disposal team disarmed the bomb.  Different pamphlets of boycotting the election slogan were found on the nearby place.

Surkhet
Two bombs were found in Birendranagar’s market area of Surkhet on Friday morning.  The bombs have been said to be targeted for the Unified CPN-Maoist leader Dr Baburam Bhattarai who was returning Kathmandu from Surkhet. A bomb disposal team of the Nepal Army (NA) defused the bombs detonated by unidentified group, immediately, said the District Police Office, Surkhet.