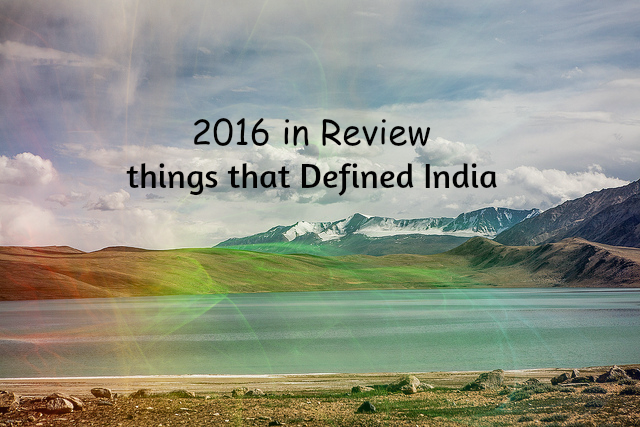 India has been of the most prominent democracies in the world, lagging only behind the US. Where the secular model of living shines to its peak. In times of Trump administration, where the whites have started to realize their numerical advantage over the minorities, or very least being made to realize that, it’s a great time to analyze how India is doing at the moment. How the economy is progressing, the current scene in scientific and technological breakthroughs, how the communities are coming along and finally what’s up with the political scene here. And in order to understand that, we shall set the past year as our standard.

Starting off with a short recall of events, that the country went through in 2016, which was really a time to test our mettle. In the 1st quarter of previous year, we were able to complete our indigenous satellite navigation system, dubbed IRNS (Indian Regional Navigation System) consisting of total 7 satellites orbiting the earth constantly. This new system of satellites put us on par with the club of few countries that include US, EU, China, Russia, and japan to own their very own version of GPS. This eliminated the dependency on foreign-based GPS technology that most of the country runs on today. This even helps us out the embarrassing situation of 26/11 where the elite security forces of the country navigated through the maze in the 3 hotels relying on tourist maps.

We overcame that situation so much that, IA was able to perform surgical strike right in the heart of terrorist camp in Pakistan Occupied Kashmir(POK), something that was totally unthinkable a few years back. Then there were numerous attacks on Indian military installations, Pathankot, Uri, pampered to name a few. These attacks tested our resilience against the ever menacing terror problem in the neighboring country. Where we responded by temporarily banning all the Pakistani actors in the country, not attending the SAARC meet that was due to happen there and suspending all commerce for a short while.

Rising from all that, we were able to establish ourselves as a rising superpower, with a promise of a better future. We hosted our very first Fleet Review, in which more than 50 countries’ navies participated. We were able to launch the MARS mission with ultra low cost. And in 2017, we surpassed our own standards and launched 105 satellites at once. Despite the trend of unstable economies throughout the globe, India was able to present itself as a viable option. Until that situation changed in November, where in an attempt to uncover black money hidden in the form of fake currencies, or undeclared property, the government released new notes of 500 and 2000, discontinuing the previous 1000 and 500 ones. This overnight put the economy of the middle and lower classes in a huge jeopardy. Though the government stats say that the economy, in general, remained unaffected, but the ground realities have a different story to tell. Nevertheless, this was resolved by January of 2017.

Another example of our rise to prominence was seen, when we were able to isolate Pakistan after Uri attacks from the rest of the states. This came as a surprise effect of the so many foreign trips that PM Modi made throughout the year, which were constantly under criticism by both opposing political parties and media as well. The past year will also be remembered as the year when we were able to question all that is wrong with the country and properly utilize the freedom of speech. With the possible exception of JNU incident, which blew over in our faces as a student revolt turning to misplaced acts of treason. We also questioned the equality of law in a case of Muslim personal law board favoring men over women. All in all, the country came together in times of crisis, leaving the petty differences aside.