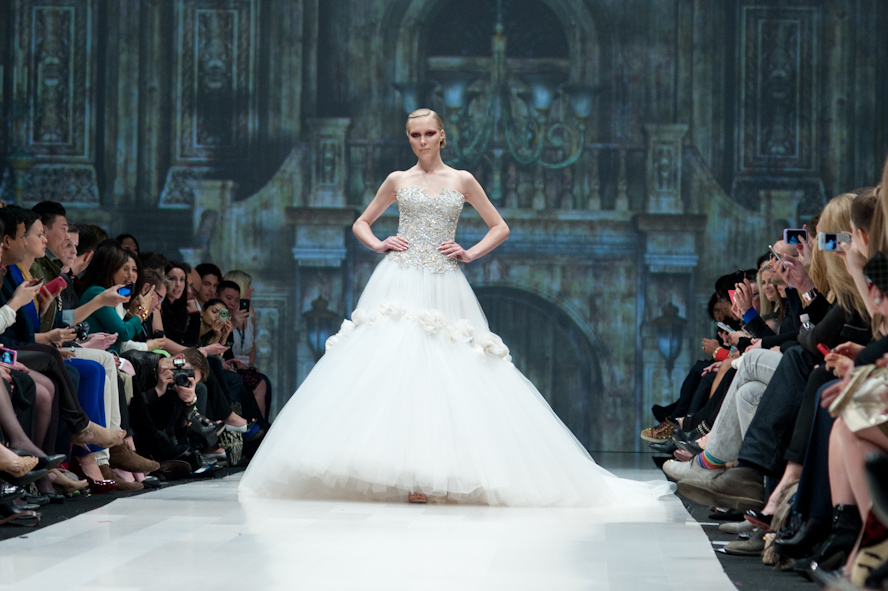 Every year during the second week of February, the hottest names in fashion send models down the runway to display their upcoming spring lines. With a mixture of both exotic and wearable fashion, the models saunter down the runway, faces covered in special makeup, with accessories and hairstyles that demand attention.

It’s always entertaining to see what fashion designers decide is innovative. This year was no different, and there are several new looks worth recognizing. Here are the top looks from New York Fashion Week.

One style in particular that stood out to those in attendance were Marc Jacob’s dresses. Each was a visual treat with large, loud patterns and flowing skirts that fell to the ankle. Though many of his styles were still a little loud for typical street wear, the bright colors, geometric and floral patterns, and flattering cuts will likely hit the street as soon, as they become the next big thing in wearable fashion – particularly since Rihanna was seen at the event sporting a gown from his line.

Combine the Hollywood evening wear glamour of the ‘90s with the ripped, tattered style of the early 2000’s, and you have Calvin Klein’s spring collection. Many of his styles seemed to be literally tearing apart at the seams. In addition, it seemed he was trying to bring back the look of wearing inner wear (like slips) as evening wear, and white was the color of the day.

Though most of the clothing presented by Ralph Lauren wasn’t what you would consider traditional nautical wear, it was definitely reminiscent of the sea. He worked mostly in dark blues, blacks, and golds, with white accents that hinted at a time when sailing was the norm. It helped that many styles sported stripes, large pirate-style belts, and large, dangling earrings.

Feathers and Lace from Marchesa

Marchesa provided a relief from the everyday cuts and fabrics with a spin on feathers and lace. The two styles went surprisingly well together. Most of the clothing presented was designated for ceremonial gatherings where evening wear or semi-formal clothing would be expected. A major theme seemed to be dresses reminiscent of sophisticated birds.

Everyone is talking about West’s unveiling of Yeezy Season 3, the fashion line that compliments his new album, “The Life of Pablo.” The unveiling occurred in Madison Square Garden and was streamed by over 20 million people. He opened the event by rapping under the stage while his models showed off a choreographed routine while wearing his new fashion line.

His line is a collaboration with Adidas, and focuses on using elements like flesh-toned body stockings, military-like fashion, and everything in blacks, tans, and greens. The styles are interesting to say the least, and they received terrible reviews. But it’s worth mentioning as one of the most iconic events of the 2016 New York Fashion Week.