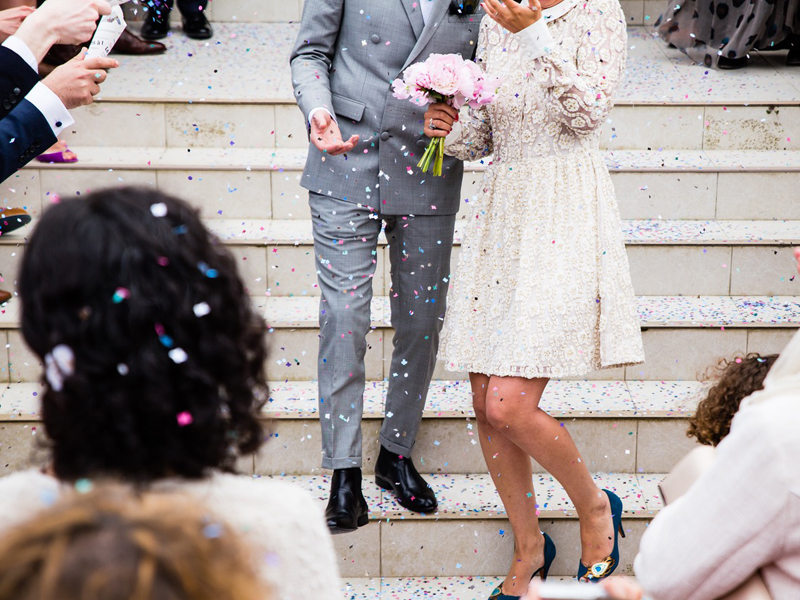 It’s interesting to watch how the wedding industry changes over the years. While classic traditions stick, the way in which they’re executed and styled often evolves. With the release of this year’s 2017 Pinterest Wedding Report, we’re able to see a glimpse of what’s in store in the coming months.

Takeaways From This Year’s Wedding Report

Pinterest is known as the ultimate source of wedding inspiration. Most girls have a “wedding board” where they collect ideas. Thus, when Pinterest says that something is popular or trending, they’re almost always right. In their most recent Wedding Report for 2017, here are a few of the trends they discovered.

1. Pink is Having a Moment

White may be the primary wedding color, but don’t overlook pink. Soft pinks are making a comeback this year and brides are incorporating this classic color into wedding invitations, bouquets, bridesmaid dresses, and even wedding cakes. Specifically, the color “dusty rose” is popular. Pins for this tone are up 255 percent year over year.

Because simplicity and minimalism are popular right now, many brides are going with simple, dual-color themes in which everything is white and pink. This makes things easy as far as design goes and prevents guests from being overwhelmed by a variety of tones.

2. After Parties are Hot

One trend that’s slowly developed over the years and is ready for a breakout in 2017 is the idea of after parties. Specifically, we’re seeing full-fledged after parties with themes, live entertainment, and, of course, food and drinks. Popular Houston wedding band, The Grooves, have noticed an uptick in requests for after party entertainment – specifically being asked to stick around for an extra hour or two after the main reception.

They aren’t the only ones, though. Designer David Stark has seen it too. “It used to be that an after-party consisted of a DJ coming on to replace the band at the end of the night for an hour or two and ‘the young people’ would dance on,” Stark says. “But 2017 will see fully developed after-party themes that stem directly from couples’ personal loves. Electronic music festivals? Your favorite cabaret hot spot in Paris? A beach party in Mykonos? This is the time for everyone to let loose in a new environment that has become a full-on focal point of the wedding night for the entire crowd.”

Don’t look now, but greenery is enjoying a little run, and actually replacing flowers in some weddings. Pinterest believes that this trend is partially rooted in the desire to cut costs, but also has to do with the “earthy” design many brides want to incorporate into their events. According to Pinterest, greenery-based table decoration pins are up a whopping 300 percent year over year.

4. Adios to the Bridesmaid

It might be shocking, but could the out-of-control bridesmaid trend be coming to an end? While we’ve seen wedding parties expand from three or four friends to 10 or more over the years, Pinterest is noticing that the reverse is happening in 2017. Some brides are even choosing to do without a wedding party!

Eat, Drink, and be Merry

Weddings are largely traditional events. Young girls grow up dreaming about their weddings and pulling ideas from varying experiences. But as you can see from the 2017 Pinterest Wedding Report, tradition can only take you so far. At some point, people want to do their own thing.

As evidenced by some of these trends, wedding attendees can expect some unique variations this year.