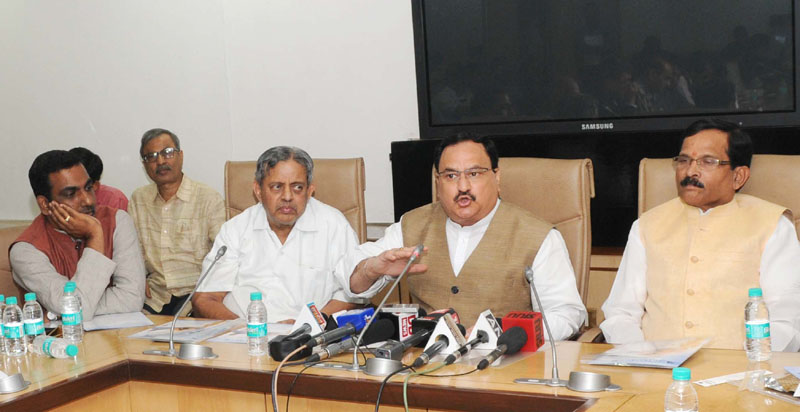 It Is Time For Making Efforts For Harmonious Amalgamation

New Delhi (PIB-GR-TYP-BIN): The 21st International Conference on ‘Frontiers in Yoga Research and its Applications’ (INCOFYRA) will bring together traditional and modern medical systems. This was said by Mr. JP Nadda, Union Minister of Health and Family Welfare on November 5, in a curtain-raiser press conference on 21st INCOFYRA, which will be organized by the Vivekananda Yoga Anusandhana Sansthana from 3rd to 7th January’ 2016, at Prashanti Kutiram, Bengaluru.

The conference will be inaugurated by the Prime Minister of India, Mr. Narendra Modi. The theme of the conference is ‘Yoga in Integrated Healthcare Systems’. Mr. Shripad Yesso Naik, Union Minister for State (Independent Charge) for AYUSH and Dr H. R. Nagendra, President of 21st INCOFYRA, President, VYASA and Chancellor, S-VYASA University were also present on this occasion.

The Health Minister said that while we have been largely successful in addressing communicable diseases through various targeted schemes/programs of the Ministry, non-communicable diseases (NCDs) are posing a formidable challenge. These are lifestyle related diseases such as cardiovascular disease, diabetes, cancer, hypertension etc., which can be managed, but not cured. He added that traditional systems of medicine such as Yoga, Ayurveda, Unani etc., can be integrated with the mainstream medicine system to provide treatment for these NCDs.

The 21st INCOFYRA provides a platform for national and international experts and practioners in traditional systems of medicine to present findings of evidence –based research regarding impact of Yoga etc. on NCDs. It is time for making efforts for harmonious amalgamation of mainstream/allopathy and traditional medicine system, he added. The Health Ministry is providing logistic support for research being done by the S-VYASA University in this regarding, Mr. Nadda said.

Mr. Shripad Yesso Naik said that the conclave will be great opportunity to bring expertise of traditional as well as modern medical science from our country and around the world. Further he said, this will also be an opportunity to learn from recent research in medical systems.

The Yoga Therapy and other systems of AYUSH on the other hand provide not just an effective treatment for NCDs but also help in prevention and promotion of positive health for blossoming well being, he added.

He informed that the Conference is expecting 10000 delegates from all over the world which would include medical students and professionals, Ayush Practioners, Yoga Researchers and Yoga Therapists and the Policy Makers. The main objective of this conference is to disseminate the research findings in the field of integrative medicine and give directions to future research on Dialectology, Oncology, Cardiology, Mental Health etc., he added.