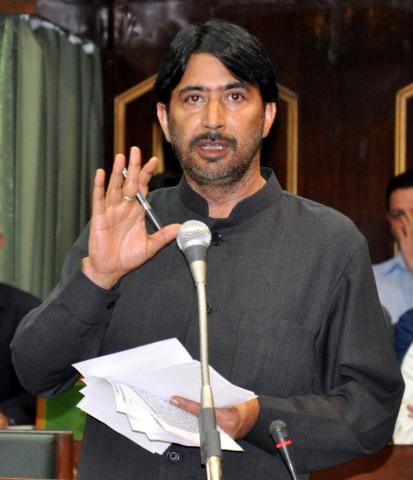 , March 18 (Scoop News) – Minister for Tourism, Ghulam Ahmad Mir has said that Government would train 25000 youth in the trades of hospitality and protocol during next four years in the state under Hunar–se-Rozgar Scheme to give further impetus to the tourist activities and to generate opportunities of employment. For this purpose the Food Craft Institutions at and Leh have been made functional.

Replying to the discussion on the demands of grants for Tourism Department, the Minister said that promotion of adventure as well as golf tourism in the State is on focus of the Government adding that to create this facility in and Ladakh, convention centres are coming up in capital cities of these regions. He said work on the upgradation of Sidhra Golf course and development of Leh Golf Course would be completed in forth coming financial year.

The Tourism Minister said that Government will encourage private players in tourism promotion in the State for which handsome incentives are available for them. He said Government has been providing loans to the intending investors up to Rs. one crore for setting up of income generating units under tourism industry. He said those who want to convert their houses into the guest houses and purchasing adventure equipment or tourist coaches can avail a subsidy amount up to Rs. 7 lakh.

G MAMir said that Government contemplates to develop 3 new mega tourism circuits one each in three regions of the state and 4th one connecting South Kashmir with Chenab Valley.  Each project is envisaged to be of Rs 250 crore valuing and to be funded by the Centre with feasible sub-projects in PPP mode.  He said that tourism potential of historical Mughal road would be explored fully by creating infrastructure facilities along the entire stretch of road.

He said that a Golf Development Authority would be created for management and maintenance of Golf courses in the State for promotion of Golf tourism in the unexplored areas of the State.

Mir said that to attract tourists towards Bagh-e-Bahu, Katra and Leh light and sound shows would be organized next financial year adding that focused attention would also be given to explore and show case the serene beauty of in Kupwara.

Enumerating the activities of tourism in the state, the Minister said that state has recorded highest ever tourist influx in 2011 and 2012, saying that 13.11 lakh tourists which included 37000 foreigners, 6.21 lakh Shri Amarnath yatries visited Kashmir Valley during last tourist season. He said 1.03 crore pilgrims visited Shri Mata Vaishno Devi while as 1.40 lakh including 38,000 foreign tourists visited Ladakh during last season.

The Minister hoped this year also the state would witness huge influx of tourists. He said peace is must for tourism boom and called upon the people to provide whole-hearted cooperation for ensuring complete peace in the state. He urged upon the legislators to use their influence in maintaining peace and tranquillity for sustainable development and tourism promotion.

Expressing concern over comfort and convenience of tourists, the Minister suggested the House to bring a resolution appealing people of the state not to cause any damage to tourist infrastructure besides emphasizing them to respect and honour the tourists which is be our prime concern and responsibility as well.

Mir said that Centre has sanctioned 79 tourism projects worth Rs 367 crore for creation of varied tourist related infrastructure facilities in the state during last four years against which 62 projects have been completed. Three mega projects including Rs 38.15 crore for Naagar Nagar, to Watlab, Rs 16.92 crore for Mubarak Mandi Heritage Conservation Project and Rs 22.43 crore for Trans-Hamaliyan Cultural Centre Project Leh are also under implementation, he added.

To preserve the rich cultural heritage of the State, the Government has forwarded DPRs of Rs 150 crore to the Centre for funding for development of Sufi Circuit in Kashmir, Spiritual Circuit in Jammu and Budhist Circuit in Leh, which in principle has been agreed to by the Centre, said the Minister.

The Minister said to promote adventure tourism in the state 2nd phase of Kongdoori-Marysholder Ski Chair Lift Gulmarg has been commissioned at a cost of Rs 17.50 crore. He said Rs 6 crore Ropeway Project Makdoom Sahib would be commissioned during coming financial year.

The Minister said that construction of Rs 40 crore, Mubarak Mandi-Maha Maya–Shahbad Cable Car project would be taken up soon after receiving , Wildlife and Environment clearances, adding that Ropeways at Patnitop and Shiv Khori would also be taken up after clearing certain bottlenecks.

The Minister said that the revenue of JKTDC is expected to touch Rs 36 crore during the current fiscal. The Corporation has expended Rs 21 crore for reconstruction of Pahalgam Club and gutted Budshah Hotel Srinagar while as construction of Rs 15.23 crore budgeted hotels at Gulmarg, Sonamarg, Yousmarg and Cheshmashahi is apace, he added.

To promote tourism potential in the districts, 20 Tourism Development Authorities have been established, under which 91 projects worth Rs 294 crore with centre funding have been undertaken. For the purpose the State Government has released Rs 141 crore during last three years. Similarly, under Jammu Task Force recommendations projects worth Rs 14.81 crore are under implementation in the division, he maintained.