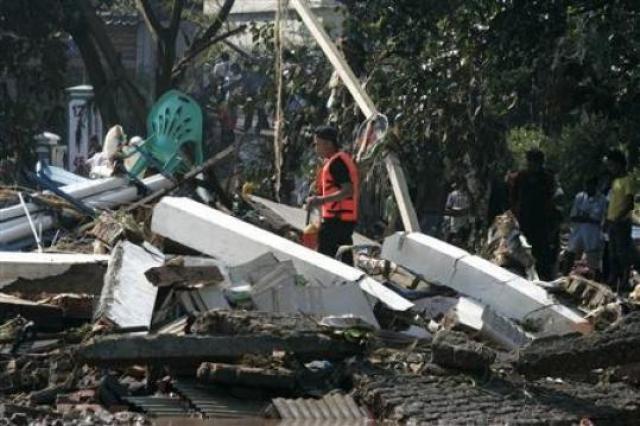 JAKARTA, March 27 (Xinhua) — The people of Tangerang, Jakarta’s outskirt city, Indonesia, said that they felt like tsunami stroke them when a dam collapsed and inundated hundreds of house and killed 50 people so far, local news reports said on Friday.

JAKARTA (Reuters) – A dam on the outskirts of the Indonesian capital, Jakarta, burst Friday, killing 28 people and flooding hundreds of houses nearby, officials said.

Police said that they were still searching the area for more casualties. Metro TV showed rescuers wading up to their chests in floodwater.

"The break down of Situ Gintung dam has claimed 28 lives, and seven houses were swept away," Chrysnanda Dwilaksana, a spokesman for the Jakarta police, said in a telephone text message to Reuters.

The dam, which was used to retain water in Lake Situ Gintung in Tangerang District, southwest of Jakarta, broke early Friday morning. There had been heavy rain in the area but so far the cause of the accident is not known.

"Hundreds of houses are flooded, tens of houses damaged, it was like a small tsunami," Rustam Pakaya, an official at the health ministry, told Reuters.

The accident was really shocking as people were sleeping at around 5 a.m.

While they were sleeping, suddenly the sound of a riot heard. "People yelled and dogs barked," she said.

When she went down to the first floor, water had been there.

Flood strikes the location regularly when rainy season comes. But this time was extra ordinary because the rain was so heavy that the dam, Situ Gintung, could not handle it.

Nearby people told the news portal that the catastrophe started on Thursday afternoon when the rain was so heavy, which in turn destroyed the dam on Friday.

"Since 2 p.m. yesterday afternoon the rain was so heavy till dusk at 6 p.m. that made the dam full of water. At 12 a.m. on Friday, the dam started to crack and few minutes later the dam collapsed," said Mulyadi, a local resident.

The heavy water current also stroke a concrete bridge which was built in the Dutch colony era.

National Disaster Management Agency Supriyadi Kardono told Xinhua that heavy rain made the volume of the dam increased rapidly, and the water gate was too small to channel the over volume water.

Meanwhile, the Jakarta Post reported that some 42 small lakes in districts within Tangerang regency are currently in poor condition with several already reclaimed for the expansion of manufacturing factories.

"Management and security should be improved," said Joachim Von Amsberg, the bank’s representative to Jakarta said on Thursday at a press conference.

He said that the bank has offered 50 million U.S. dollars to improve the dams’ condition and function.

"The lakes serve as absorbing areas during the rainy season and water reserves in the dry season," said Jacki Zakaria Harahap, an official of the city.

He also said that some of the lakes were claimed as private property by certain individuals. Separately, Kurtubi Su’ud, chairman of the commission overseeing environmental issues admitted that the lack of control from the administration had resulted in the lake reclamation.

"If this persists, Tangerang will experience annual flooding like Jakarta," he said.

The Jakarta Post daily observed that many small lakes are dirty, dry and shallow.

"Some of those lakes are heavily polluted now that not allow people to use the water anymore,"" said Madrozi, a local resident who lives nearby.

Filed under: Health & Science, Lifestyle
Share Tweet Pin G Plus Email
previous article: Obama:US to expand force in Afghanistan
next article: Obama:Return of outsourced jobs not good for US