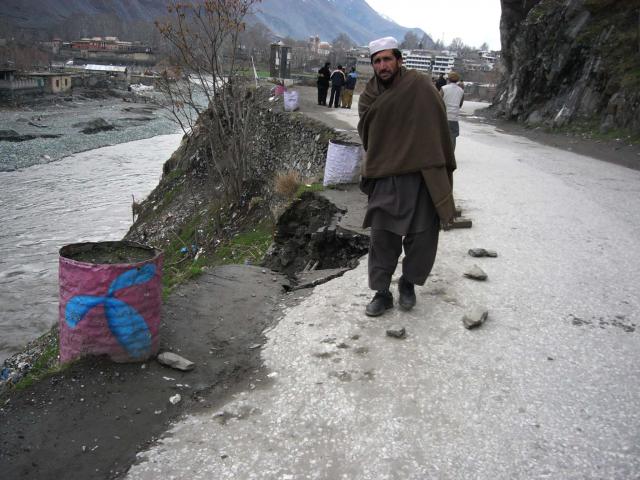 Shutter down strike ended after 7 day set in protest for restoration of electricity continue.

CHITRAL:  Shutter down strike on the call of trade union Chitral  against suspension of power supply ended on 7th day. Chairman Kashmir Affairs and former minister of State Shahzada Muhayuddin held negotiation with president and his cabinet of trade union Chitral. MNA assured for approval of separate transformer and distribution line for bazaar, installing of 40 water point, drums for disposing up of garbage and transfer of Ghulam Rashid line superintendent of Peshawar Electricity Supply Company Chitral. President trade union Habib Hussain Mughal said that MNA could not satisfied them for un-gradation of local hydro power house and said that this is out of the reach of my authority. He said that traders of Chitral closed their shops for 7 days and demanding for their genuine rights of restoration of electricity which has been suspended for the last 17 days after breaking and fallen of cable and poles of main transmission line due to heavy snowfall at Lawari top. He said that after meeting of cabinet members of trade union it was decided that our peaceful protest and set in strike would be continue until fulfillment of up-gradation of hydro power house. Trade union declared while talking to local journalists that our peaceful movement for up-gradation of local hydro power house would be continued.

CHITRAL: Drosh police are trying to arrest killer of three persons including a woman at Ursoon village situated on Pak Afghan border area. Talking to this scribe Station Head Officer Police station Drosh Abdul Qadir said that some unknown persons had entered in the house of Ameer Zaman and opened indiscriminating firing on the people inside of the house during midnight of Wednesday and Thursday as a result they killed three persons including a woman. Those who were murdered were identified as Ameer Zaman son of Ameer Muhammad resident of Ursoon (Pak Afghan border area), Muhammad Tahir son of Muhammad Nabi resident of Nooristan and Maryam Bibi wife of Muhammad Tahir Nooristan. Hence the criminal success to flea from the scene after killing three persons. Drosh police lodged FIR against unknown person under section 302 of Pakistan Panel code and started further investigations. Police said that it might be caused of old enmity of border area people.

Meanwhile  a small kid namely Numan son of Habibullah resident of Goldeh Broze badly injured when he was hit by a heavy land sliding on his way. He was rushed to DHQ hospital Chitral where he is under treatment. Hospital source told this scribe that his life is out of danger.
G.H. Farooqi Po Box No. 50 GPO Chitral Pakistan phone No. 03025989602, 0943-302295, 414418
Email: gulhamad@gmail.com