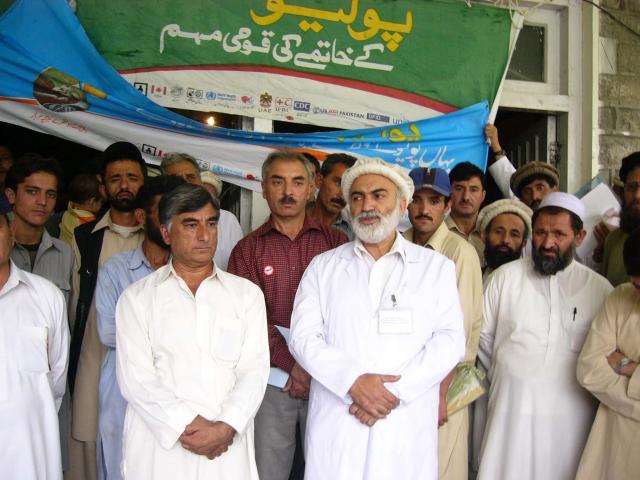 CHITRAL: Resignation of President Musharaf was warmly welcomed by people of Chitral hence some people expressed their concern over his resignation because of launching excavation of Lawari Rail tunnel by President Musharaf. But majority of the people termed his resignation a good luck for Pakistan and for strengthening of democracy in the country. Many of the people said that he failed to implement his seven point agenda for enhancing life standard of common people and to minimize foreign loans of Pakistan. Some people also accused him for military operation (So called according to their views) in the country where thousands of innocent people were killed and hundred are still missing. But some people also having some reservations that the present government also failed to control price hiking and life of poor man is in great miserable condition. Hence it is good luck of the country and I hope that military operation and suicide attacks will be minimized after his resignation a passer by said during survey of this scribe.

To explore Polio vaccination and drive Dr. Gul Zar Ahamd Children Specialist explained different reasons causing for polio disease. He stressed upon the masses to must use potable drinking water (boiled) and wash their hands with soap after using toilet. EDO Health Dr. Sher Qayum said that in the early 1989 there was 20000 polio cases in the world that were reduced to 755 and 15 polio cases have been registered still in Pakistan 8 in Sindh, 5 at NWFP, 2 at Balochistan while Punjab is polio free province. Dr. Nazir Ahmad Medical Superintendent of DHQ Hospital and Dr. Inayatullah EPI coordinator also spoke on the occasion. They appeal to parents to help health teams and must administer polio drops to their children upto the age of 5 years and in case of arrival of no team they should to must inform EDO Health on toll free number 080012012 or 15 of police control room to arrange detailing of an other team to the missing area.

CHITRAL: A brief Ceremony held regarding launching of Livelihood Program (LP) in Brir valley of Chitral.

Khalid Hussain, Regional Program Coordinator LP North Region presented objectives, approach and implementation arrangements of the program. He explained that Swiss Agency for Development and Cooperation (SDC) is the funding agency for this program, while Interoperation (IC) Pakistan and government of NWFP are the implementing partners. He told that Objectives of the program are to improve the quality of life of the marginalized communities of the valley and to equip them to better respond to opportunities and risks through enhancing their income and asset base.

Tehsil Nazim Chitral called for coordinated and integrated efforts to improve the livelihood opportunities of the people and to help protect the unique culture of the valley. He also extended all out support to the program.

On this occasion district level officers of Agriculture, Livestock and Forest Departments also extended their support in achieving the objectives of the program.

Livelihood Program (LP) also signed a contract with Ayun Valley Development Program (AVDP) for implementation of the Program at grass root level. They were issued a Cheque worth rupees 451000 to Rahmat Elahi Nazim of Union Council Ayun and Chairman AVDP for improvement of agriculture, forest, skill, livestock, and drinking water and to improve non-formal education. A large number of representatives from social sector also participated.