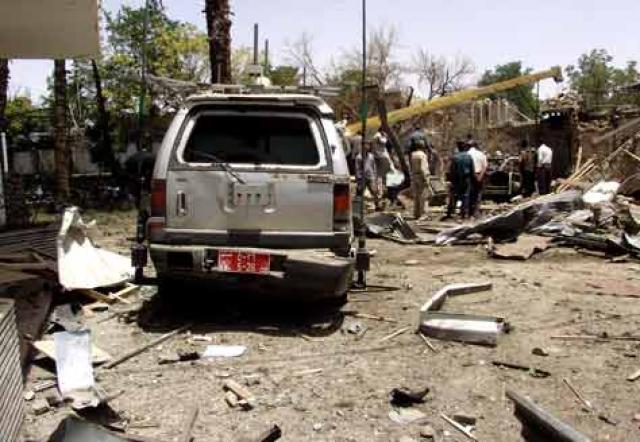 Suicide car bomb hit the Indian Embassy in Kabul on Monday, killing 41 people and wounding 139 in an attack, Afghan authorities said was coordinated with foreign agents in the region, a likely reference to Pakistan.
Defence Attache Brigadier R D Mehta and Counsellor Venkateswara Rao were killed when the suicide bomber targeted the embassy during the morning rush hour, Indian ambassador Jayant Prasad, who escaped unhurt in the bombing, said. The other two Indians killed in the attack were identified as ITBP personnel Ajai Pathania and Roop Singh.
Afghanistan has accused Pakistani agents of being behind a number of attacks in recent weeks and Afghan President Hamid Karzai last month threatened to send troops across the border to attack militants there if Pakistan does not take action.
Afghan analysts argue Pakistan is loath to see the emergence of a strong Afghanistan that is friendly to India and is secretly backing the Taliban as a "strategic asset", enabling Pakistani forces to concentrate on defending the Indian border. Pakistan denies the Afghan accusations and strongly condemned Monday’s attack in which the bomber rammed his car into the embassy just as two diplomatic vehicles were entering.
"I saw wounded and dead people everywhere on the road," said Danish Karokhil, the head of the independent Pajhwok news agency, whose offices are close by. India’s military and press attaches and two Indian guards were among the 41 killed, but a line of people waiting for visas and shoppers at a nearby market were the main victims of the blast, the deadliest in Kabul since US-led and Afghan forces toppled the Taliban from power in 2001.
A Taliban spokesman denied responsibility for the attack, although another militant spokesman said earlier the hardline Islamist militia had been behind the bombing. The Taliban often disown attacks that kill large numbers of civilians.
The explosion destroyed the two embassy vehicles, blew the embassy gates off, all-but demolished the embassy walls and badly damaged buildings inside the compound. Windows were shattered hundreds of metres (yards) away. Forty-one people were killed and 139 wounded, a senior police official said.
"The Interior Ministry believes this attack was carried out in coordination and consultation with an active intelligence service in the region," the Afghan Interior Ministry said. The militants have vowed to step up their campaign of suicide bombings this year, graphically demonstrating that despite the increase in foreign troops in Afghanistan and more trained Afghan forces on patrol, the Taliban are far from being a spent force.
"With this cowardly attack, the enemies of peace in Afghanistan wanted to hurt ongoing friendly relations of Afghanistan with the rest of the world, especially India," Karzai said in a statement.
"Such attacks will not hamper Afghanistan’s relations with other nations." India has close relations with the Afghan government and is funding a number of large infrastructure projects.
"The government of India strongly condemns this cowardly terrorist attack on its diplomatic mission in Afghanistan. Such acts of terror will not deter us from fulfilling our commitments to the government and people of Afghanistan," the Foreign Ministry said in a statement.
Pakistan was the main backer of the Taliban when they ruled Afghanistan from 1996 to 2001, but Islamabad officially dropped support for the austere Islamist movement as a result of intense US pressure in the wake of the Sept. 11, 2001 attacks, ordered by al-Qaida leaders hosted by the Taliban.
In Islamabad, police allowed up to 70 Kashmiri activists to enter the diplomatic enclave where they chanted anti-India slogans outside the Indian High Commission. An Indian diplomat said their appearance caused some alarm because the Pakistani authorities would normally forewarn the embassy of any demonstration, but no warning was given this time.
Filed under: Politics, World
Share Tweet Pin G Plus Email
previous article: Mortgage Crisis: Darkest Just Before The Dawn
next article: Rahul Vaidya wins the first Singing Superstar