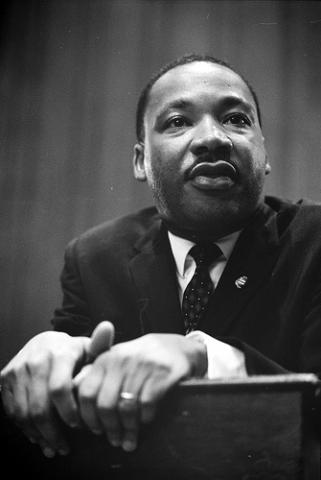 Martin Luther King Jr. was assassinated 40 years ago this week in the midst of a campaign to support striking Memphis sanitation workers who were trying to gain better pay and working conditions by joining a union.

Now, a new report by the Center for Economic and Policy Research (CEPR) shows that four decades after King’s death, union membership is still the best route to a better life for African American workers. Unions and Upward Mobility for African-American Workers found that black union workers earned, on average, 38 percent more than their nonunion peers. Click here to read the entire report.

This is significant since reports show the current economic downturn is hitting black workers especially hard. Says John Schmitt, a senior economist at CEPR and author of the report:

Unions continue to be a central element of any plan to improve economic equality in this country.

According to the study, unionization has an even more dramatic effect on black workers in low-wage jobs. Among African American workers in the 15 lowest-paying occupations, union members earn 14 percent more than those workers not in unions. In the same low-wage occupations, unionized black workers were 20 percent more likely to have employer-provided health insurance and 28 percentage points more likely to have a pension plan than similar black workers who were not in unions.

The advantage to African Americans of joining unions is clear from recent studies showing blacks’ incomes are dropping at the same time fewer African Americans belong to unions. The percentage of African Americans who either are members of or represented by unions fell by half from 31.7 percent of all black workers in 1983 to 15.7 percent last year, according to another CEPR report.

The combination of African American willingness to join unions and the impact of the nation’s economic freefall on them and other minorities presents a historic opportunity for the union movement, Robert Zieger says in a Point of View column on the AFL-CIO website.

Zieger, a professor of history at the University of Florida, says:

Since African Americans and other minority workers, along with disproportionate numbers of women workers, toil in service industries—places such as hospitals, nursing homes, schools, restaurants, entertainment complexes—the contemporary U.S. economy in some ways offers unique opportunities for organized labor to reverse its long-term numerical decline. Thus, black workers are at the heart of organized labor’s hopes for revitalization in the 21st century.