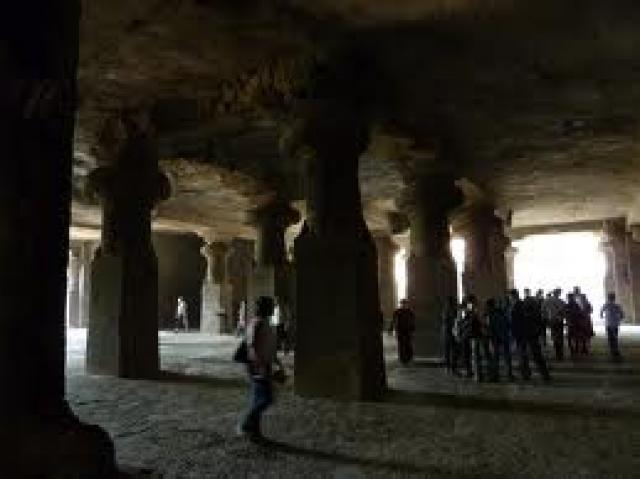 Although other parts of the world and to other regions in India, it is Western India that we see such a profusion of what are known as cave temples.

The horizontal layers of the trap-rock which characterize the region are probably responsible for this phenomenon. The hills have perpendicular cliffs and are impervious to moisture, permitting an easy interpolation of caves. The remote and isolated rocky terrain must have provided the necessary inspiration to the pious to make them hew temples out of the rock. Although the earliest Indian caves were built in Bihar by the Ajivika sect, in Western India it was the Hinayana School of Buddhist which first built these quasi-eternal temples as a substitute for the previous perishable wooden structures.

Later, Mahayana Buddhism, Jainsim and Brahmanism were in turn inspired by the simple elegance of the early. Hinayana caves. But the term `cave’ is misleading, for these temples are skillfully scooped out and carved by hammer and chisel out of the solid cliffs and are masterpieces of rock-cut sculpture. They are believed to be India’s greatest contribution to the world of art, brilliant in conception and breathtakingly beautiful in design. Located on the ancient trade routes, they give an indication of the flow of commerce to from this region in ancient times.

Some of the oldest of such caves are at little –known Pitalkhora, near Chalisgaon. The descent to the caves takes you to a bowl of breathtaking beauty, making it obvious that the selection of the site was made by person with the souls of artists. The painting of the Buddha and the Bodhisattvas on the pillars of the main cave and the system of drainage in these caves are ample evidence of the artistic and engineering skills of ancient India. Near Bassein, at Soapara, is a Buddhist stupa of the third century B.C.

Although Nasik is well known, few visitors are aware of the nearby Pandavleni or Pandu Gufa. These caves, going back to the first century B.C. have been excavated on the slopes of rocky hills with a commanding view of the Mumbai-Agra road beyond. Five out its twenty four caves- especially the Chaitya cave with its decorative art- are the particularly worth seeing. At Karla, near Lonavla, is the largest collection of Chaitya caves in India. Apart from the famous caves of Ajanta and Ellora, the lesser known caves of Maharashtra are: the Pitalkora caves in Marathwada, the Aurangabad caves and the Pandavleni caves at Nasik.