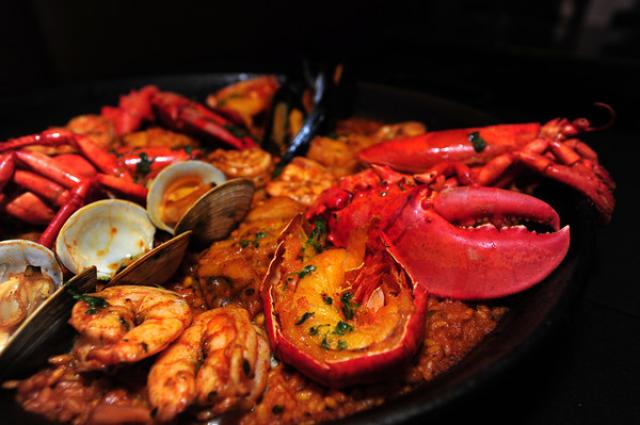 If you want a taste of traditional Spanish cuisine, it’s hard to find a better pick than paella. It’s a savory dish that is synonymous with Spanish culture, as well as tradition. Even though it may be a tradition of Spain, authentic paella can be found right in the heart of Georgetown, at the Bodega Spanish Tapas & Lounge. Dishing up several varieties for customers to choose from, Bodega has earned a reputation for pleasing people with their authentic paella.

“We take our paella seriously,” says Ryan Fichter, Executive Chef of Bodega Spanish Tapas & Lounge and Thunder Burger. “It’s important to us that we bring the taste of this special traditional dish of Spain to the people of the Washington DC area. It’s one of our signature dishes, and we do it well.”

While many people in America enjoy eating a meal of paella, most are not familiar with anything beyond the fact that it tastes good. Here are 5 things to know about paella:

1. Valencia visions. While paella is popular throughout Spain, its origins are most widely associated with Valencia. Over 5 million tourists from overseas visit the region each year, with many taking in a dish of paella during their stay.

2. Main ingredients. Paella is a dish that contains saffron-flavored rice, olive oil, and usually meat or seafood, along with vegetables. A typical paella dish might include rice, seafood, and some seasoned vegetables, for example.

3. The perfect pan. The name ‘paella’ comes from the special type of pan that is used to make it. The pan is a flat, round, metal pan that has handles on both sides. The pans come in a wide variety of sizes, ranging from those that can feed a couple of people up to those large enough to cater events and weddings. There are even pans so large that they can feed thousands of people. Such pans are now seen as tourist attractions in some areas of Spain.

4. Eating together. Typically, the paella pan is brought right to the table, once the meal has finished cooking. It is then set on the table, so that people can eat together directly from the pan.

5. Record-breaking paella. Believe it or not, people do try to set paella records throughout various regions of the world, aiming to make the world’s largest paella. One of those records was set in El Salvador in 1999, when a team cooked up a paella that featured 1,000 pounds of chicken, 400 pounds of pork, 1,000 pounds of vegetables, and 550 pounds of rice. The dish was prepared in a huge paella pan and it made enough to feed 2,500 people.

“While we are not trying to set paella world records, we are out to make a great impression with our paella,” added Fichter. “I’d say we have done that. We have the best paella around, and it keeps people coming back for more!”

In addition to their other options, Bodega’s menu offers an entire paella section for the pleasure of the diners. With seven options to choose from, there is a paella for every taste and preference. Varieties include those featuring seafood, chicken and duck, as well as a vegetarian option.

Bodega, located at 3116 M St. NW, offers a happy hour, a weekend brunch and patio seating during nice weather, and serves lunch and dinner daily. They also offer private party hosting for parties up to 50 people, which can be held in the “Matador Lounge,” the bar, or the patio. The private party areas have an exclusive sound system and a full bar, and offer food selections from a special private-event menu. The restaurant chooses one lucky Facebook fan per month to win a $50 gift certificate for dining. For more information on Bodega, visit www.bodegadc.com.