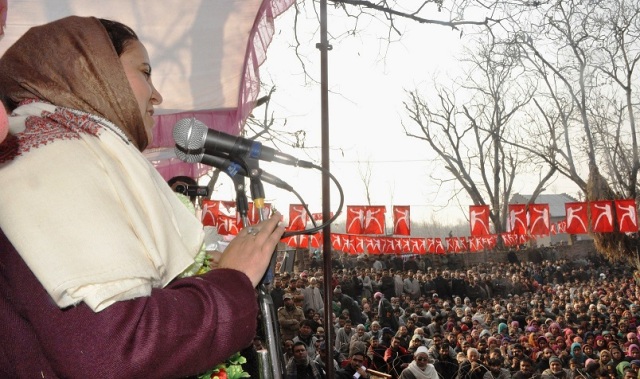 Anantnag, December 17, (Scoop News)- Minister for Social Welfare and ARI Trainings, Ms. Sakina Itoo today said that the present government is working for the betterment and upliftment of the people of the far-flung and weaker section of the society of the State and massive development has been recorded across the State.
Addressing a mammoth gathering at Churat Qazigund, Ms. Sakina said that Government during last five years has implemented the welfare schemes aimed at upliftment of the people of hilly areas and weaker sections so as to ensure the development of these areas besides improving socio-economic status of people.
The Minister while giving brief of the landmark achievements of present Government said that the State Government left no stone unturned in redressing the problems by launching number of welfare and developmental schemes in all the three regions of the State. She said government led by Chief Minister Omar Abdullah has taken landmark initiatives for making J&K State a developed and prosperous State and introduced revolutionary Acts such as RTI and PSGA which has made administration accountable, transparent and speedy besides people have been empowered to be part of governance by enacting Panchayati Raj System in the State.
Ms. Itoo said government has launched a special drive for upliftment of weaker sections of society and people living in far flung areas and in this regard Churat, Augura, Berigam and Pajhen areas of Kulgam District have been recently declared backward so that people of these areas are benefitted at large.
Stating that various areas of Kulgam district are topographically difficult but a wave of development like other parts of the State has witnessed in this area also adding that the people here are living comparatively a better life than five years before.
The Minister said that the promises of speedy development are being fulfilled and foundation for peaceful and economically sound J&K has been laid during last five years of coalition regime, however, there is always room for improvement and government is making all out efforts to extend necessary facilities to other uncovered areas.
Ms. Itoo said number of welfare schemes and developmental projects have been completed which have yielded fruitful and progressive results in improving living standards of people living in remote and far flung areas, adding that such many more programmes are in pipeline for completion for people. She appealed the people to come forward and take benefits of welfare schemes launched by the State and Central Governments.
MORE AT http://scoopnews.in/det.aspx?q=34211