Lawyer of the petitioner, Mohib Ullah Terichvi has submitted a complaint to District and Session Judge seeking justice demanding lodging of FIR against the doctors of Surgical A Unit Hayatabad Medical Complex and Medical Director, for their negligence. Petitioner contended that owing to negligence and non professional behavior on part of the doctors and hospital staff his son lost battle for life due to a condition that was curable if treated on time.

Petitioner accused that doctors turned a blind eye to their responsibilities and delayed the operation of Muhammad Farhan leading to his untimely death in a blooming age of 13 years.

Earlier the journalist has submitted written applications to concern SHOs as well as to IGP, Health authorities and concerned police officers but failed to get justice. After facing nonchalance and indifferent attitude of authorities the senior journalist submitted written application to court for due assistance in lodging FIR under 22-A CrPC against the doctor for dereliction of duties in the serious case that cause death of a boy who would have been saved if given treatment on time. 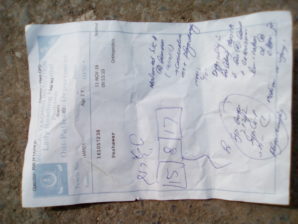 Filed under: Crime, News
Share Tweet Pin G Plus Email
previous article: All That You Need To Know Before Becoming A Programmer
next article: NASDAQ:CACQ Investor News: Investigation over possible Violations of Securities Laws by Caesars Acquisition Company