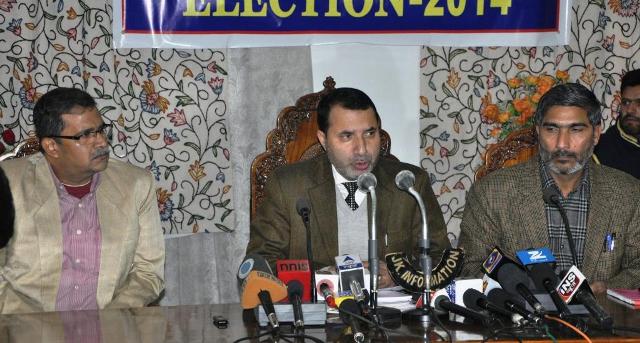 Srinagar, November 19, (Scoop News)-The Notification for the conduct of 4th phase of general elections of Jammu and Legislative Assembly including for the 8 constituencies of district Srinagar was issued by the Election Commission of India today.
As many as 623717 electorates including 324725 male and 298988 female besides 4 third gender electorates shall exercise their franchise in the 8 Assembly constituencies including 18-Haqratbal, 19-Zadibal, 20-Eidgah, 21-Khanyar, 22-Habba Kadal, 23-Amirakadal, 24-Sonawar and 25-Batamaloo of district Srinagar during the Assembly Elections-2014.
This was given out by the District Election Officer, Srinagar, Farooq Ahmad Shah during a press conference held here today.
SVEEP Observer for district Srinagar, K. Syama Prasad and Nodal Officer for district Srinagar, G.M. Dar also accompanied.
Speaking on the occasion, Shah said that 804 polling stations at 412 locations have been set up in the district besides for the facilitation of 30364 Kashmiri Migrant voters of Srinagar district, 25 special polling stations including 20 at Jammu, 04 at Delhi and one polling station at Udhampur have also been set up. He also informed that there are 38 service voters in the electoral rolls of the district.
For the smooth conduct of free, fair and transparent elections in the district, 15 nodal officers have been appointed for different assignments to provide timely information to the general public besides Assistant Expenditure Observers, Video Surveillance teams, Video Viewing teams, Accounting teams, three flying squads and three static surveillance teams for each assembly segment of district Srinagar have been constituted to monitor the election expenditure of the contesting candidates besides Media Certification and Monitoring Committee has also been set up, Shah added.
He also said that for maintenance of law and order, the district has been divided into 23 zones comprising of 111 sectors for which zonal magistrates and sector magistrates have been deployed.
Shah further said that for the ensuing elections, 1630 ballot units and 997 control units of EVMs are available and first level training of EVMs has been imparted to poll staff at Entrepreneur Development Institute, Srinagar.