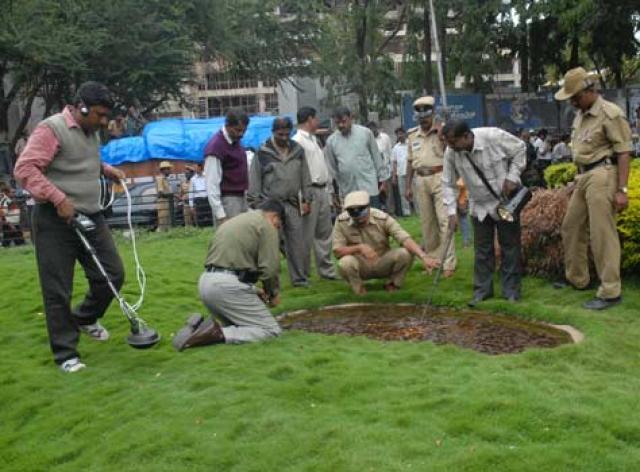 Bangalore Police Commissioner Shankar Bidri said the seven blasts went off within several minutes of each other at different spots across the city. One woman was killed in an explosion at a bus stop in the city’s Madiwala neighborhood, he said.

Bidri said each of the small bombs contained the amount of explosives equal to "one or two grenades".

"In all these cases they have created the blast using timer devices," Bangalore Commissioner of Police Shankar Bidri told reporters at the site of one of the blasts.

Some IT firms, as well as schools, colleges, malls and cinemas closed after news of the blasts broke. Phone lines were jammed.

"I was on my way to office when we heard a noise," witness Arun Daniel told a news channel. "It sounded like a cracker. The traffic was blocked, everyone was running around. It was not a severe blast."

A TV channel showed a small shopping stall in Bangalore with broken windows and its concrete floors broken in pieces. Rubble littered another site.

M R Pujar, additional police commissioner for Bangalore said "crude explosives" had been used. "There were seven low-intensity explosions," he said. "Some of them were in crowded areas."