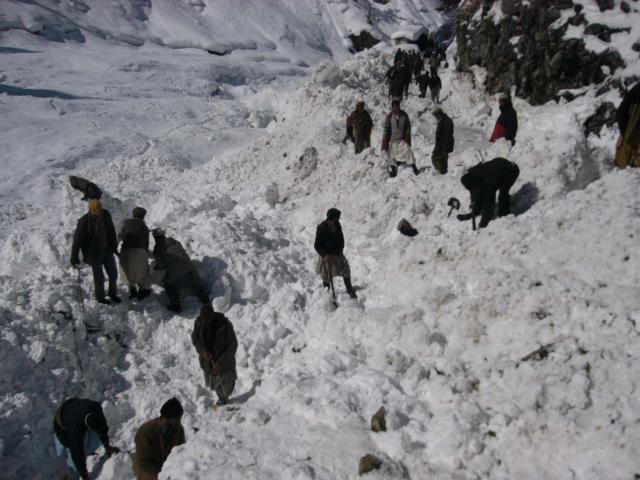 CHITRAL: An other dead body recovered from avalanche at Ziarat village recovered dead bodies reached four hence three dead body are still missing. Dead body of Muhammad Shuaib son of Noor Muhammad resident of Jhang cantt Punjab was recovered from the north portal side of Lawari tunnel. Hence dead bodies of three persons who were working in a hotel of Ziarat ate still missing. Local volunteers of Ziarat and Ashriat village are removing snow with hand and local equipment and searching  to recover these missing persons.  Mutahida truck driver union arranged for pick and drop of volunteers from the surrounding areas who participating in search and rescue operation. Some 25   loaded trucks and 10 small vehicles are also badly strained in the snow. Three loaded trucks including Haleeb distribution Drosh also has fell down in deep ravine including three other loaded trucks who badly have been fully covered and strained in avalanche. As a result goods worth million of rupees have also damaged. As well as these loaded trucks also fully damaged. Some three trucks and five other vehicles are missing and they are also covered under heavy avalanche. Israruddin  and Ihsanullah councilors of union council Ashriiat complained that National Highway Authority and Sambu company did not provided them any excavator or bulldozer to remove snow from avalanche hit place and to search dead bodies. Hundred of people from the surrounding areas participating turn by turn in rescue operation on volunteer basis and relatives of died persons working on self help basis. A local social worker Azizullah and Rahmatuddin vice president of Chitral driver union have appeal  Federal Minister for communication Dr.  Arbab Alamgir and chairman NHA for issuing directive to NHA high ups for provision of  excavator, bulldozers and other machinery to bereaved family and participating in search activities so as to recovered these three dead bodies of missing persons as soon as possible.
G.H. Farooqi PO Box No. 50 GPO Chitral Pakistan phone no. 0302 5989602, 0943 302295
Email: gulhamad@gmail.com 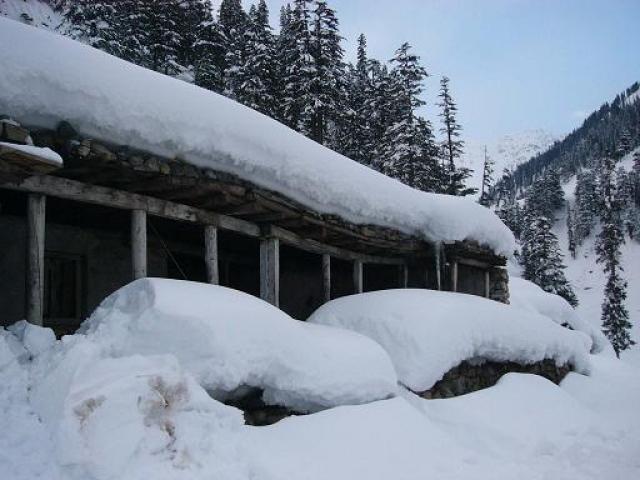 CHITRAL:  As well as 7 persons died while 4 trucks have been strained in glaciers. According to In-charge police post Ashriat Sahib Nabi a heavy avalanche fell down suddenly at Ziarat village on Monday Evening as a result 7 people strained under the glacier. All of them were died hence 3 dead bodies recovered from snow while 4 persons are still missing Sahib Nabi added. Talking to this scribe he said that some 2 feet snow have been recorded at Ashriat village while more than 4 feet snow fell at Ziarat where this sad incidence occurred. Main Peshawar road also blocked due to avalanches while portals of Lawari tunnel blocked from both sides (Dir and Ziarat side).

Those who died under avalanche are identified as Mumtaz son of Gul Nawab resident of Ashriat Chitral was a Dumper driver with Korean Company Sambu, Farman Electrician of Dir and one unknown labor belongs to Punjab was working as labor in Sambu company. The  missing persons are identified as Muhammad Din of Dir Panakot, Hussain Ahmad son of Rahmanuddin of Ziarat Chitral, Ihsanullah son of Saeedullah resident of Samar Bagh Dir and Inayatur Rehman of Qolandi Dir upper.

The only land route connecting Chitral to other parts of the country also blocked for all type of vehicular traffic since Monday. Local people and volunteers are trying to recover dead bodies of missing people hence they facing great problems due to blocking of all roads and heavy snowfall. Social and political circle of the area strongly criticized Focus Humanitarian Assistance team who badly failed to approach that area and participate in rescue operation.  Besides them some 4 trucks also badly strained under avalanche one of them was carrying milk pack of Haleeb distribution Drosh and was taken by strong wind and put away on a rock. Million of rupees goods damaged in these trucks. Ashriat police, Chitral Scouts, and local volunteers are busy to recover these 4 missing persons under heavy avalanche.