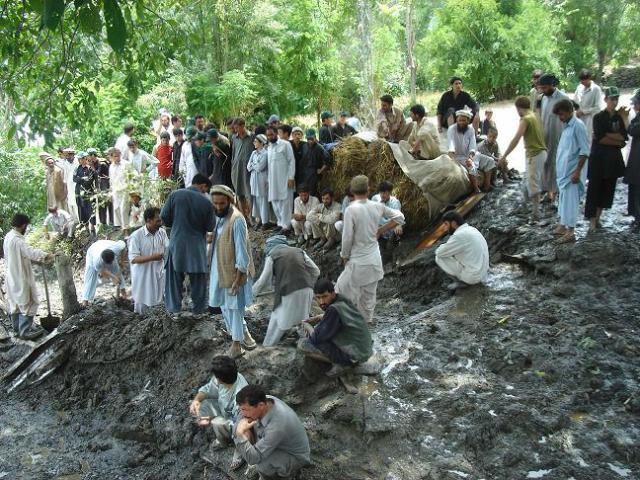 CHITRAL: As well as 7 dead bodies recovered from the debris after heavy flood at Uchosht village near Chitral town. According to Subadar Major of Border Police Chitral Maqbool Ahmad heavy flood hit Ochosht village last night as a result 7 houses totally damaged and some 20 other partly damaged. Residents of the area were inside their houses and walls and roofs of their houses suddenly collapsed when a 10 feet high row of flood hit the village. Many people were died due to flood hit and strained under the debris. Local people told that border police force reached their first of all on the spot and started their rescue activities. Later on Chitral Scouts, Chitral Police and Focus Humanitarian Assistance squad also participated in rescue activities. Besides it boys scouts of government schools also participated in rescue and supporting drive. Seven dead bodies have been recovered from the debris Subadar Major Maqbool Ahmad confirmed 5 women and 2 men and rescue teams are trying to recover other missing persons. A shock able event was scene at that time when a 3 years child was weeping for    his mother as his mother, father and three sisters died in this incidence but he was survived miraclly. Reasons behinds this heavy flood is telling grazing of goats in the area. An elder person Muhammad Nasir told this scribe that we had banned goat grazing for some years and there was not flood but when local people allowed these goats in this area they snatching and eradicating small sapling and trees causing for such tremendous flood.

Those who died were identified as Zakireen, Riaz Ahmad, wife of Jameel Ahmad, Nadsir Khan, his sister etc.
President Legal Aid Forum for Human Rights Abdul Nasir visited the area and expressed his great concern over that rescue team still working with the help of spade and local equipments. He appeal to federal as well as provincial government to provide them heavy machineries like excavator machines, dozer, loader etc so as to remove tons of heavy debris and to recover missing persons.