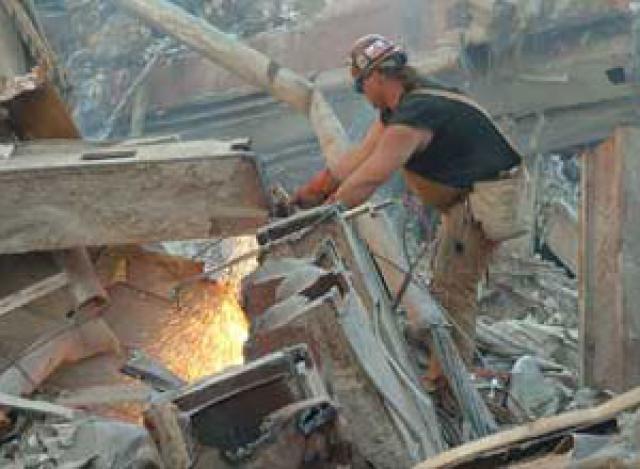 Medical and health and safety experts today urged Congress to approve new legislation to establish a permanent monitoring, research and health care program for the responders and people who lived and worked near Ground Zero who were exposed to the same mix of pulverized glass and concrete, asbestos, lead and burning jet fuel.

The exposures were made much worse by EPA’s [Environmental Protection Agency’s] pronouncements that the environment was safe and OSHA’s [Occupational Safety and Health Administration’s] failure to enforce workplace safety and health requirements during the entire 10-month period of rescue, recovery and clean-up operations at the WTC [World Trade Center] site.

As many as 100,000 responders—firefighters, paramedics, rescue and recovery workers—were exposed to the stew of chemicals and other toxic substances in the rubble of the World Trade Center following the Sept. 11 terrorist attacks.

But nearly seven years later, not only is there no guaranteed comprehensive medical treatment program, but the Bush administration consistently has delayed and blocked efforts and cut funding for Sept. 11-related health care.

The bill (H.R. 6594), the James Zadroga 9/11 Health and Compensation Act, is named after a New York police detective who died from the after-effects of responding to the disaster. It was originally introduced last year but was revised, and today’s hearing marked its reintroduction. Said Rep. Jerrold Nadler (D-N.Y.) one of the bill’s co-sponsors:

We are hopeful that today’s hearing marks the beginning of our collective seven-year struggle in pressing this case….Despite our sustained efforts to get the administration to develop a comprehensive plan….the New York delegation has instead found itself coming to Congress with its “hat in hand” to test its luck in the annual appropriations process.

Over the years, Congress has approved funding for a monitoring program operated by the New York City Fire Department and Mount Sinai that examined nearly 40,000 responders, and most recent figures show nearly half are being treated for World Trade Center-related conditions.

But the year-after-year fight to win funds can delay or deny health care treatment for Sept. 11 victims, said Seminario.

On September 11, 2001, and the days that followed, tens of thousands of brave firefighters, police, emergency workers and construction workers answered the call when the nation was attacked. They toiled for days, weeks and months trying to save lives, recover victims and repair a broken city.

Now thousands of these workers and others are sick as a result of World Trade Center exposures, many are disabled and some have died….many more who are ill have yet to receive the care they need, and there is no long term plan or funding to ensure that medical treatment will continue. These brave responders have received the nation’s gratitude but now they need the nation’s help. It is time for Congress to provide these responders and all who are sick as a result of the World Trade Center attacks the ongoing medical care and compensation they need and deserve.