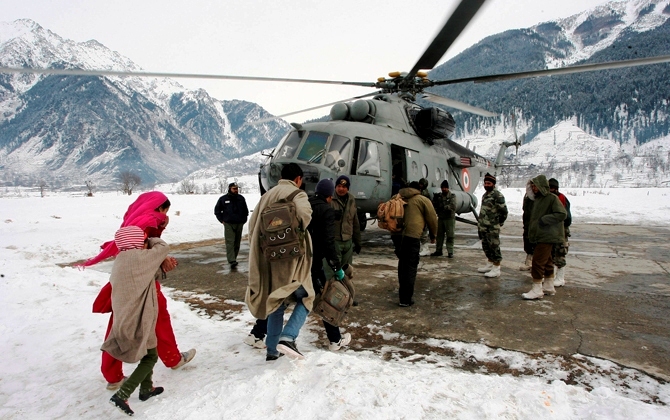 130 Helicopter Unit – “The Condors”, of IAF stationed at Jammu undertook a demanding operation of rescuing strandard people from the inaccessible villages of kishtwar district.

Braving extreme cold conditions, IAF’s MI-17 helicopter in assistance with the local administration airlifted 72 people from remote parts of Kishtwar district where they had been trapped for the past two days.

The operation was carried out under the captainship of Sqn Ldr Shailesh Singh and Co-pilot Flight Lieutenant Ashutosh Khanduri. The aircraft took off at 0800 hrs and continued with the operations in the freezing temperature of minus 6 degree Celsius.

130 HU was also commended earlier by the state chief minister, Omar Abdullah, for undertaking rescue and relief operations during natural calamities which had enabled to save many precious lives.
MORE AT http://scoopnews.in/det.aspx?q=34635