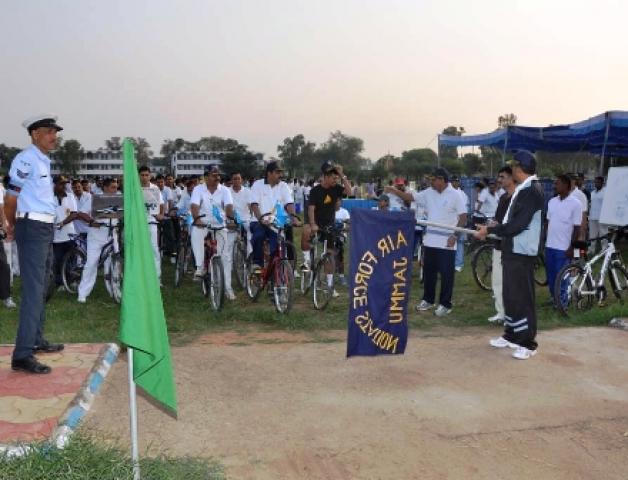 Jammu, October 4  (Scoop News) –23 Wing, Air Force Station Jammu organized a bicycle expedition on 02 Oct 11 as part of 79th Air Force Day celebrations. The expedition was flagged off by Air Cmde Nitin Sathe Air Officer Commanding Air Force
Station Jammu.
The bicycle expedition was open for all the personnel of Air Force Station Jammu and their families and was headed by Air Cmde Nitin Sathe himself. Around 30 students of Air Force School also participated in this expedition.
The starting and finish point of this expedition was Air Force Stn itself, 13 km long route was followed covering almost all the major places of the Jammu city like Tawi bridge, war memorial, Bahu Plaza and Satwari Chowk. This distance was covered by all the participants in less than one hour which is a true example of high josh and motivation of Air Force personnel.
Huge participation from all the spectrums of Air Force Station and good coordination made this event a success exhibiting the pride and honour of the men on duty for the nation.
Filed under: Media & Tech, World
Share Tweet Pin G Plus Email
previous article: “Cash for MLC seat”, alleges Dr. Jitendra
next article: Dr Darakhshan meets GOC white knight corps