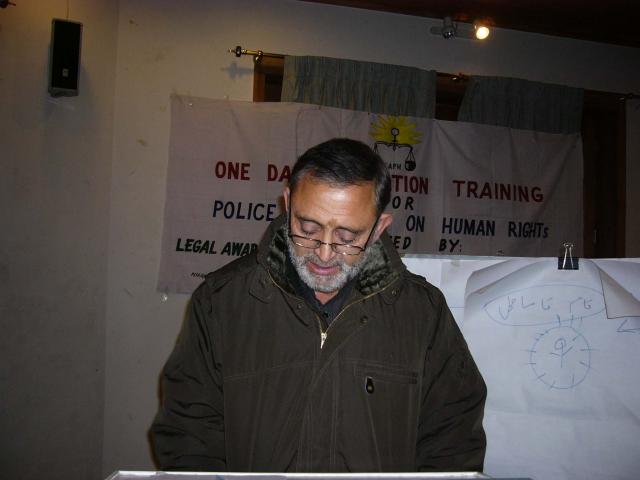 80% crimes can be reduced if police perform their duty honestly. DPP Azmat Esa.

CHITRAL: District Public Prosecutor (DPP) Azmat Esa advocate said that 80% crimes can be eradicated and can be decreased if police perform their duty honestly. He was addressing to the male and female police (officials) cobs including Station head officers (SHO) of different police station, police officers, judiciary staff, human rights activists during a one day orientation training for police officials on human rights. Legal Awareness Program organized the training for Human rights (LAPH) Chitral, which is financially supporting by Trocaire an Irish based NGO. Niaz A Niazi Advocate who was performing as stage secretary briefed the participants on legal point of view. While Chairman board of Directors LAPHP briefed the participants about aim and objectives cum achievement of his organization.  He said that LAPH working for benefit of entire humanity in the area and especially fighting for protection of women rights in Chitral district. Prominent social worker, master trainer and human rights activist Mrs. Shabnam Nasir explained different aspects of human rights in detail while she was delivering lecture on the title. The participants were are also presented flowers and roses as symbol of peace and to love each other.

She sensitized police official regarding protecting basic human rights and stressed upon them that they are the main stakeholders who protecting humanity and play role in human rights safeguard because in case of any violation people approach to Police. District public prosecutor Azmat Esa while addressing on the occasion emphasized on police officials especially Mukharar (report writers) and SHO working in different police station to must bring changes in their behaviors to general public and create and develop trust among the masses. He said that Islam has bestowed real status and rights to women folk some 1400 years ago but we are responsible for violating their rights. He said that a disharmony and disturbance create at that time when we not decide on justice and exploited rights of others. He said that if we perform our duty and not violate rights of other there would be no nuisance and no panic situation in the society like we suffering these days. He said that Islam has explained and determined a code of conduct and declared rights of every body in the society if we respect each other and give their genuine rights there would be no un-peaceful situation in the society.  He said that we should to respect  each other as legally, social and morally  and that is real message of Islam. He stressed upon police officials to play vital role in eradicating crimes and social evils from the society.

DSP headquarters Shamsur Rehman said police can never curb the crimes without cooperation of public. He offered of his full cooperation in this regard and asked LAPH to inform them in case of any human right violation at any police station for remedy and addressing. He said that crimes spreading due to injustices and if we decide and implement justice in our daily life there would be no violation.  A large number of male and female police officials, students, human rights activists participated in the sensitization training on human rights.

Filed under: Politics, World
Share Tweet Pin G Plus Email
previous article: CBS Shekhandeh might be closed if not funded by Govt.
next article: Sri Lanka’s Opposition Leader Ranil To Stay Away From The Premiership In A Care Taker Government