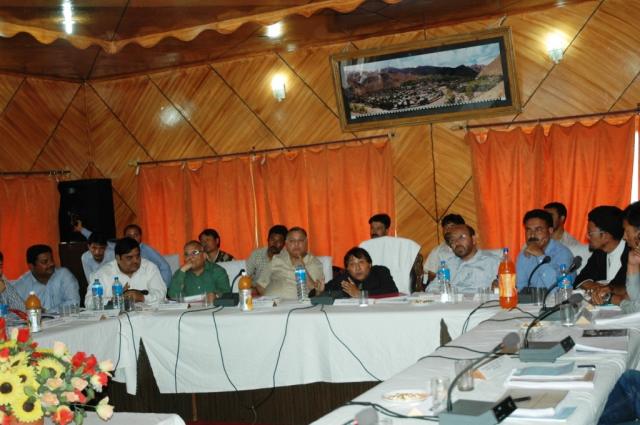 Srinagar, August 11 (Scoop News) –Minister for Roads and Buildings,  G.M. Saroori has directed the engineers to work on war-footing basis to restore the road communication in Leh region, where roads & bridges have suffered heavy damages due to recent flash floods.

At a meeting of officers of Roads and Buildings, JKPCC and Planning Department convened by  Saroori, it was informed that as many as 29 bridges have been damaged in the area snapping road communication in many villages. It was given out that, nine bridges have been temporarily repaired and road links restored to 12 villages so far while efforts are being made to restore road communication to rest of the affected areas as early as possible, the meeting was told.

In order to deal with the extra ordinary situation in this hilly region, the Minister said that special funds will be earmarked for an estimated damage of Rs 2.68 crore on the repair of roads & bridges. He directed the concerned agencies to rush supply of material such as cement, steel for carrying out the rebuilding works soon after the clearance of Srinagar-Leh highway.

To  assess the situation arisen due to the flash floods in Kargil district, a high level committee headed by the Minister for  Consumer Affairs and Public Distribution and Transport  Qamar Ali Akhoon today convened  a meeting with district officers at Baroo here.

Briefing the meeting, the Deputy Commissioner gave a detailed account of flood losses of infrastructure and standing crops in the district. He said as many as 29 villages of Kargil, Shakar Chiktan and Shargole have been affected in the floods where crops, fruit plantation, 70 residential houses have been damaged, adding several roads have been cut off in these areas.

Raju said the LAHDC has constituted three teams one each for Kargil, Shakar Chiktan and Shargole blocks to conduct survey and compile detailed report of losses. As per their preliminary survey reports Rs 75.81 crore losses have occurred due to flash floods in the district, he said and the delude has affected 40 irrigation canals, 85 water supply schemes, 25 roads, 10 bridges besides crops.

The meeting was informed that water and power supply has been restored in kargil town and restoration of road network is going on apace in all the affected areas.

Addressing the meeting,  Akhoon said the Chief Minister has already released Rs 4 crore for restoration of vital infrastructure including road links, water supply, electricity, etc in the district. He asked the concerned officers to speed up pace of restoration works to extend immediate succor to the affected.

The Minister urged LAHDC to monitor the restoration work effectively while assuring that funds won’t be any constraint in rebuilding the infrastructure in the flood areas.

The meeting passed a condolence resolution, expressing grief and sorrow over the unfortunate deaths in cloudburst and devastating delude in Ladakh region.

Earlier, the Minister along with team visited the affected areas of the town and interacted with the people. He assured all possible help from Government in extending succor.

Filed under: Media & Tech, World
Share Tweet Pin G Plus Email
previous article: BJP demands immediate arrest of all anti-national elements in Jammu
next article: Innovation of the Week: Handling Pests with Care Instead of Chemicals