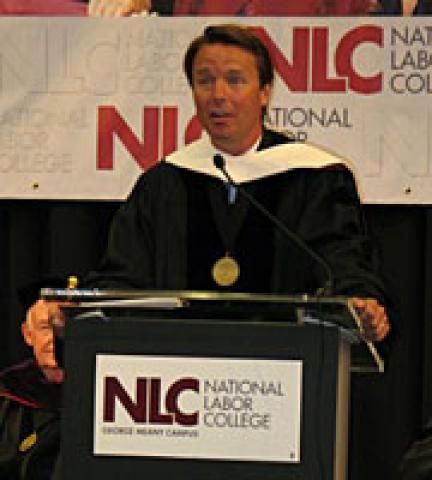 Ninety union members reached a major milestone in their lives over the weekend, receiving their college degrees in ceremonies at the National Labor College (NLC).

Former presidential candidate John Edwards told the graduates they are now the next leaders for justice:

"Brothers and Sisters, this is where you take your degrees to wage the next battle of workers’ rights in this country. This is where you become our next leaders to fight for what working men and women need to get ahead."

The graduation also represented two milestones. It marked the National Labor College’s 10th annual commencement and was the first for new NLC President William Scheuerman. He urged the graduates to understand the responsibility that comes with their degrees:

"Ours is a college dedicated to service: to our members, to our communities, to our brother and sister workers both here in the U.S. and around the globe. Having built our movement through the sacrifices of others you must help to make it possible for others to gain the benefit of union membership."

More than 800 students, families, friends, public officials and union leaders watched as 76 students received Bachelor of Arts degrees and 14 were awarded master’s degrees through the NLC’s partnership programs with American University. AFL-CIO President John Sweeney, who chairs the NLC Board of Trustees, told graduates and their families the union movement needs educated members:

"We need you all and your commitment now more than ever because the values we share are under relentless attack by the forces of greed, self interest and a cynical indifference to the rights of working men and women—the rights to a safe workplace, good, secure jobs and a decent living. "

Sweeney, who introduced Edwards, praised the former North Carolina senator for helping to break the mold of public officials who only give lip service to workers’ rights:

On the night of his election to the U.S. Senate, from the right-to-work state of North Carolina in 1998, John Edwards publicly gave credit to the unions of that state for helping him win. He is a leader who has never discarded or deserted the values that shaped his life.

Edwards, who grew up in a working-class family, was the Democratic candidate for vice president in 2004. A strong supporter of workers’ rights and social justice, he now leads Half in Ten, an effort by several organizations to reduce poverty in the United States by 50 percent within 10 years.

Two students received special recognitions at the graduation ceremonies. Pam Fero, of the National Air Traffic Controllers Association (NATCA), received the 2008 Seidman Award, given to students whose senior paper best focuses on aging and retirement issues. Clyde Babylon, a member of the International Heat and Frost Insulators and Allied Workers, was honored with the President’s Award for completing his degree after losing his home and job to Hurricane Katrina in 2005. Tony Yushinsky, of NATCA, spoke on behalf of the undergraduates, and Craig Duffy, of the Electrical Workers, delivered remarks on behalf of the students in the master’s program.

Established as a training center by the AFL-CIO in 1969 to strengthen union member education and organizing skills, the NLC, located in Silver Spring, Md., is now the nation’s only accredited higher education institution devoted exclusively to educating union leaders, members and activists. The NLC became a degree-granting college in 1997.