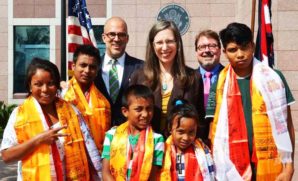 The United States Embassy,  United Nations High Commissioner for Refugees (UNHCR) and International Organization for Migration (IOM) have confirmed to re-settled the 90,000 Bhutanese refugee, living in Nepal.
US Ambassador to Nepal Alaina B. Teplitz in a press statement has been quoted, “The Nepali people and government have been very gracious hosts to refugees for decades and the third-country resettlement of Bhutanese refugees is one of the most successful refugee management stories in recent memory.”

“However, the massive resettlement programme is coming to an end. While the international community continues to ask the Government of Bhutan to repatriate those refugees who would like to return, finding a durable solution here in Nepal for those who will remain is critical,” added she.
The third-party resettlement programme for the Bhutanese refugees in Nepal started in 2007 with the supported from the the UNHCR, IOM and Government of Nepal, thousands of Bhutanese refugees who were forced to leave Bhutan. Most of them have been settled in Australia, Canada, Denmark, Netherlands, New Zealand, Norway, the United Kingdom and the United States of America for their resettlement. With 90,000 in the United States, the total number of Bhutanese refugees who have been resettled to third-countries has reached 105,000.
The Bhutanese ethnic cleansing took place in early 1990s, where hundreds of thousand Nepali origin Bhutanese were forced for exile. They were forced to be limited in overcrowded refugee camps in eastern Nepal with no progress toward a resolution of their plight. Many rounds of bilateral talks between the governments of Nepal and Bhutan could not resolve the issue.

The Universal Declaration of Human Rights, as well as binding international treaties signed by Bhutan, ensures the right of the refugees to return to their country. During this long period of exile, however, Bhutan has not allowed a single refugee back. In midst of that the US and other supporting agencies started the resettlement program which has led in ensuring at least a quality of life for the refugee.