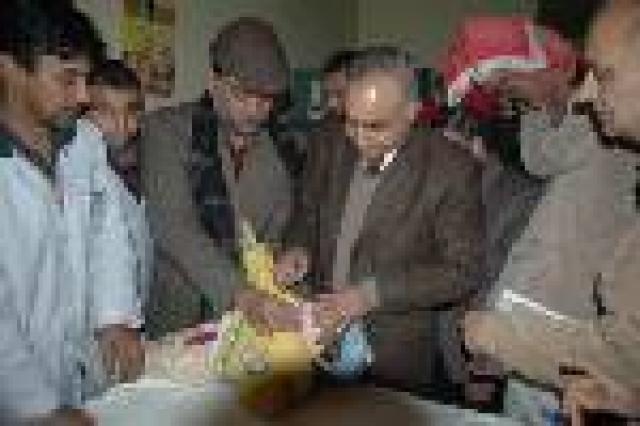 , Febuary 01 – As many as 995782 children upto the age of 5 years were administered pulse polio drops in the second phase of the campaign launched today across the valley. About 21000 staff including para-medicos, supervisors and Aanganwari workers were deployed in various centers for the purpose.

This was stated by the Director Health Services, Kashmir Dr. Muzafar Ahmad here this evening. He said 5270 pulse polio centers were set up including far off areas like Kargil, Leh Zanskar, Gurez, Tulail, Karnah etc.

The Director said that the pulse polio programme has been launched in 1995in the state and has remained a successful programme for eradicating polio disease among the children. He further said that department has not received any report regarding any case of polio from province so far.

In all, 145777 children were given pulse polio drops for which 539 centers were established and 2247 staff deployed for the purpose. The other officers of the Health Department were also present on the occasion.

Similarly, in Anantnag district 115463 children were covered under this programme and 530 polio centre were established and 2120 para medical staff deployed.

Similarly, 67717 children of Pulwama district were administered pulse polio drops for which 1460 para medical staff was deployed and 365 centres established.

In Shopian district 43495children were covered under this programme for which 1064 para medical staff were deployed and 266 centres were covered.

In Ganderbal district 44501 children were covered under pulse polio programme for which 848 para medical staff was deployed for the purpose and 212 polio centres were established.

The pulse polio programme has been launched in Leh and Kargil districts also.