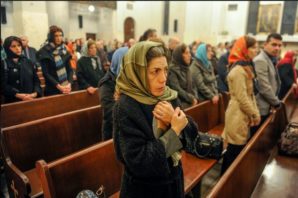 The United States Commission on International Religious Freedom (USCIRF), in Monday’s publication of its 276 page 2016 annual report says it shows ‘a road map of deterioration.’ Pages 45-49 of the USCIRF report focus on the Iranian clerical regime saying of their judicial system that it ‘continues to use its religious laws to silence reformers.’ […]

Anyone familiar with the reality based TV show on Discovery Channel called “The Devil’s Ride” knows that veterans are prominently represented in the two motorcycle clubs featured on the program. Rockem, for example, the club president of Sin Mob is a former Marine. So is Danny Boy, the former club president of the Laffing Devils […]

Being a true Christian, a true follower of Jesus Christ, is not meant to be something easy, not by any stretch of the imagination. We all have our “Comfort Zones” our little imaginary bit of space where we feel comfortable and at ease but, Is this where one should be when we are working […]

As perceived by Mr. Jaswant Singh, former minister expressed at Al Jazeera March 31, 2011(Scooped news) India, the former Minister of Finance said, "dynasticism" played a leading role in the culture of political corruption. Corruption is crippling India? At first glance, such a question seems absurd. After all, India is the foundation of democracy, since […]

A new study titled MapChange 2010 shows that major North American brands are still not hitting the consumer mark when it comes to sustainability. The study incorporates both actual measurements on climate change action being undertaken by over 90 companies across North America, and perception measurements of these companies’ actions by consumers. Companies include category […]

Obesity and related disorders are a growing concern throughout the world. Although there are genetic predispositions to obesity, the number of genes involved is very large. Furthermore the rapidly increasing frequency of overweight and obese individuals in many parts of the world cannot be due to increase in frequencies of any of the obesity related […]