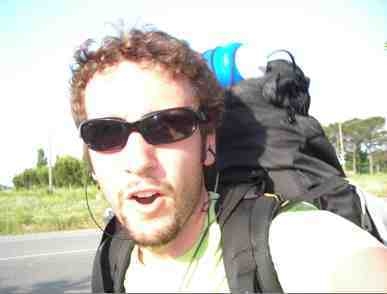 An evening with your friends drinking a famous beer can bring about a bet to win.
Some evenings before May 21st, a 25 y.o. guy from Rome, Gianluca, was sure the upcoming Heineken Jammin’ Festival will take place in Imola as every past years, but his friends strongly disagreed and rather confirmed Venice from June 14th to 17th.
This was the reason who generated the most followed bet among the Italian bloggers.
Gianluca’s friends, sure about the next place of the rock festival, challenged the guy to run from Imola to Venice to pay the bet, if he will be able to achieve the mission in return they will pay to him the entrance tickets for every evening of the festival.
The feat immediately jumped at the bloggers’ eyes as Gianluca, kean about the travel and run, decided to document every single ride and step into his blog, helped by photos and videos took with a camera and camcorder.
The guy left the Italian capital with only € 250, but from the very beginning he tried to ask for hospitality in B&B, agritourisms and private houses, to save some money and to have a real contact with the native people of the places of his stops, he already met some guys along his road to Venice who wanted to run with him or simply personally see him live; in the last days the guy also received his first offers of interviews by national radio stations, now we are sure his group of fans is destined to increase quickly.
Gianluca in the past days had to face an incredible hot weather in the area of Bologna which was mixed to the fatigue of carrying a rucksack with the essential necessary, such as a few clothes for every kind of weather, socks and good shoes to run, maps and notebooks, a small beauty case and a few other technologies.
The guy, a senior year student in Psychology, can be found online with the nickname "Giastar" which mixes his real name "Gianluca" with the word "star" and which in Italian, if divided in two parts with a slow spelling, can also sound as "already star"; his Italian blog is reacheable at the link http://blog.libero.it/Giastar, people who usually visit his blog follow him and write comments to support his mission, offering a bed for the night or simply with words of solidarity.
Gianluca’s efforts quickly gain the hearts of all the Italians who perfectly know the Heineken Jammin’ Festival, a famous Italian summer live show of famous and less famous rock bands who, already for some years, unites Italian young ones in their strong desire of amusement.
Now it is time to follow the continuation of the itinerary of Gianluca who in these days is running in the area of Ferrara and who will have to reach Venice within June 14th to win his bet.