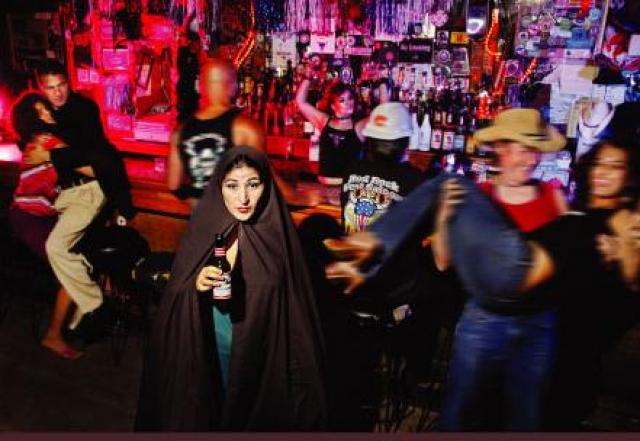 By Kayla Malahiazar
Between her and the Jewish man she met at a bar, a new way of calming Middle Eastern tensions was born in the form of stand-up. “With every sweaty pelvic thrust, I feel like we are getting that much closer to peace in the Middle East. It’s called the two genital solution.” Negin Farsad’s personal approach to Middle East peace requires intelligence, experience, and lots and lots of comedy.
Wearing her audacious glasses with a fire red frame that contrast her jet-black hair and compliment her lipstick, the Iranian Muslim American comedienne can’t help cracking a joke every other sentence. In the time it takes to drink a coffee she can perform an impersonation of her mother’s thick Persian accent, tell stories of the white kid who made fun of her hairy legs and unibrow in elementary school, and use enough profanity to make any sailor on the Straight of Hormuz blush.
Farsad grew up in “the desert” of Palm Springs, CA in a household where two foreign languages are spoken, Farsi and Azeri, given that her parents emigrated from Tabriz, Iran, which is home to a large Turkic population. Although both her parents are supportive, Farsad enjoys impersonating their “go to answer” when asked what their daughter does for a living. “’Eh she is comedian BUT she went to Cornell and got two Masters from Columbia.’ You know they latch on to these things that they know are kind of traditionally measures of success or whatever.  They are good they are great, but they just don’t get it.”
Farsad is not only a performer. She has written and directed works titled, “The Israeli-Palestinian Conflict: A Romantic Comedy,” a show that tracks the historic conflict back to a botched one-nightstand at the Geneva Convention in 1948, “The Dirty Immigrant Collective,” a standup show featuring “comedians of the immigrant, minority, or otherwise outcast variety,” “Bootleg Islam,” and “Iran-ing on Empty,” Farsad is upfront about her political satire and sexual humor that serve to bring the funny out of the current political and social reality of the United States’ relationship with the Middle East.
Farsad’s most recent project, “The Muslims Are Coming!” is a stand up tour and soon to be film that uses the stage “as a sounding board not only for punchlines but for social commentary” on the issue of Islamophobia. The traveling band of Muslim comedians tour through the South and the Midwest of the United States doing free shows in everywhere from small coffee shops to large auditoriums and setting up  “Ask a Muslim a Question” booths in town squares all over the country.
The first stop was Gainesville, FL made infamous by Pastor Terry Jones’ attempt to upstart an “International Burn a Quran Day.” Although Farsad expected some negative audience reactions, she was pleasantly surprised to get some positive commentary. “Sometimes people come up to me and say like ‘That was so funny and educational!’ That’s very shocking to me every time, that anything I say should be remotely educational hah, but you know that’s gonna be the most that they know about anything human in Iran, because everything else is just news stories about how they are enriching uranium.”
Farsad also conducted interviews with celebrity personalities like John Stewart, Colin Quinn, Lewis Black, and Aasif Mandvi for “The Muslim’s Are Coming!” documentary. Interviewing CNN’s Ali Velshi, who is an Ismaili Muslim of Indian decent, Farsad proudly recounts one of the most humorous approbations of her comedic style. “Velshi, he’s a Muz, I told him, ‘There are comedians on this tour that talk about their vagina, do you think that’s appropriate?’ And he said ‘I would rather be affiliated with a vagina than with terrorism.’”
Not every audience member is quite as pleased with the comedienne’s racy humor. “I mean I have had plenty of people come up to me and call me a whore, sending me hate mail saying I’m a whore, whorey whore whore, they LOVE the word whore.“ She says one of the most salient examples occurred in Tucson, Arizona during “The Muslim’s Are Coming!” tour.  About twenty Muslim audience members walked out on Farsad’s bit. “There was a ring leader, and she did this motion and everyone stood up and left, and then there were complaints after the show that I was racy and its not appropriate cause I’m Muslim and I shouldn’t be talking about ‘those things’, I was like but I’m an American Muslim you fucks, and THAT’S DIFFERENT.”
The difference for Farsad is that she represents and Americanized face of Islam one that is “super fucking secular.” “I eat pork like it’s a job and I get wasted and that’s how I’m just as Muslim as most others are Christian, which is to say not that much.”
Spreading these messages through comedy is something Farsad can’t help doing because it’s just what comes naturally. “If you want to create a discussion about it culturally, I think it has to be through comedy.”
Filed under: Lifestyle, Opinion
Share Tweet Pin G Plus Email
previous article: Raising money for a charitable cause
next article: South Sudan Oil Transit to Resume, Lamu Project will continue