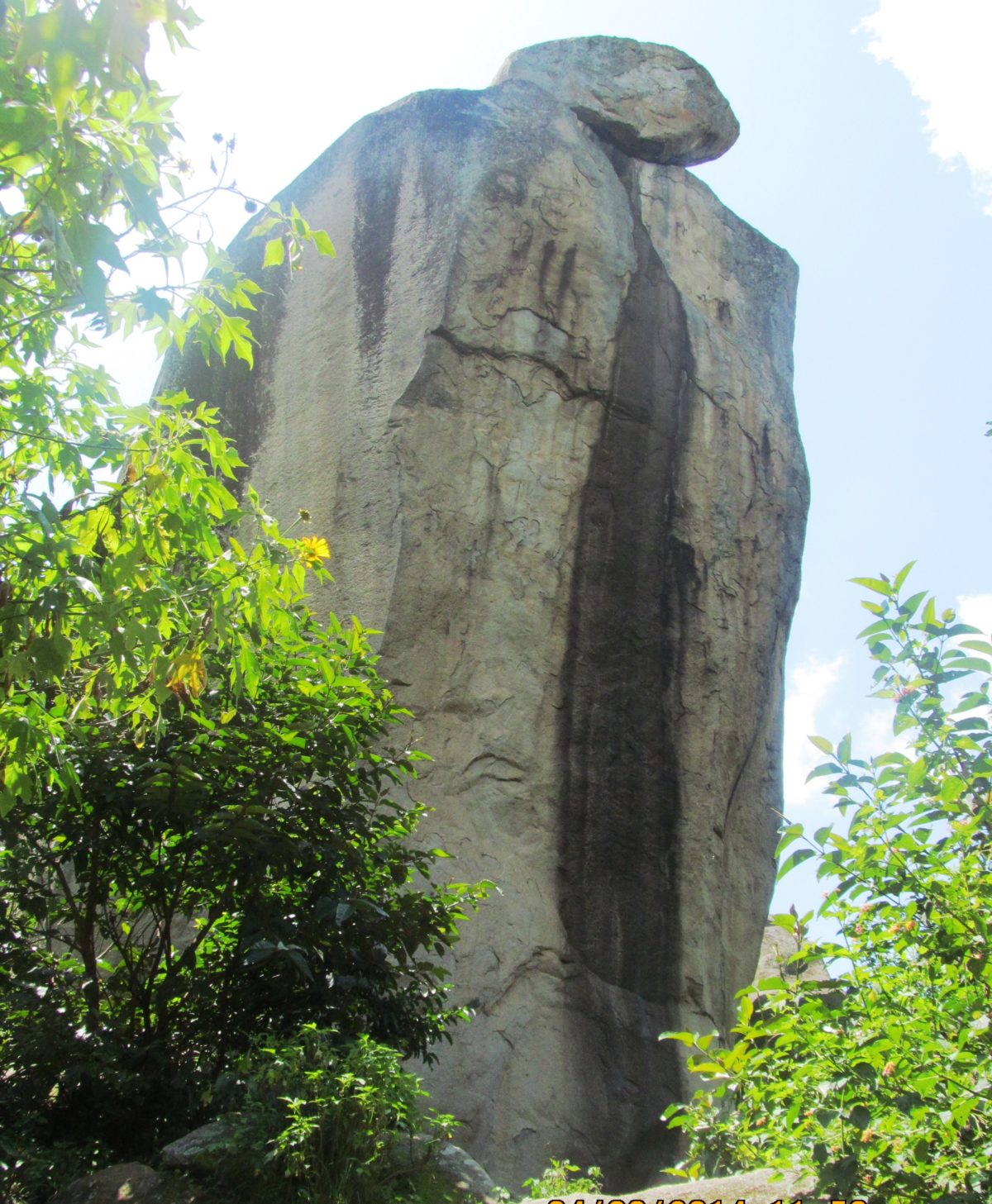 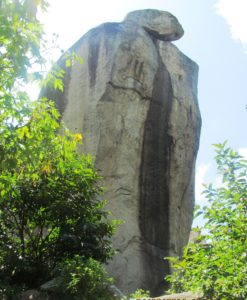 scars left when water running down the crying stone dried up.

For many years, the crying stone at Ilesi on Kisumu Kakamega road in Kakamega County cried! But eventually the 40m high acid plutonic rock has stopped shading its tears of joy and put on an ugly smile of scars created by its tears. However, someone would ask themselves why and how this came about. The answer they will get is like a leopard in darkness that you can on see its glowing eyes and easily stage-manage your reasoning that it is a cat.

The landmark of Kakamega County is long gone but its memory of tears of joy still lives in those who have visited it before they dried up. For those who would like to pay a visit, they will only walk away with a mental picture of what used to happen to it. Thanks to the vivid description and narrative gift of residents living around it.
Its tears would have disappeared from several causes ranging from natural to human causes.  Rapid climatic changes are one of the natural causes impacting the stone. For example, Natural issues like global warming, green house effect may have an upper-hand in vanishing its tears. Just like in other parts of the country where vital sources of water have dried up. Increasing temperatures could possibly have evaporated its water to while still on its way its top.
Secondly, human activities around the rock also endanger it. From main road sometimes back, you could view Mr. crying stone in your cars as you pass-by. But that is no longer possible! Tall trees have provided a cover to the crying stone. They have made a thick forest around it in that those people pass on the high can no longer see it while on the highway. We are acquainted with trees been excellent. However whoever decided on the choice of the variety of trees made a big mistake.
Agriculture experts clarify to us that eucalyptus tree are legendary in aborter excess water from the soil and looses it very quick to the atmosphere by transpiration  thus leaving the soil with little water to support other plant. Plants of this breed have formed thick forest around the rock. Trouble comes in whereby eucalyptus trees use excess water leaving little water for the crying stone.
Additionally, eucalyptus trees have established massive root system that spreads them in the soil tapping any drop of water from it. This could have evaporated excessive water used by the rock leading to its dry ups.
More so, the rock had cultural and religious significant to people living around it. Sacrifices were made at its foot to gods of rain to bring rain to the community during times of drought. It also has a certain cave in it where the outcasts in the community were cleansed with traditional herds before been reaccepted back in the community. Tradition dances like isukut .tindikit lithungu and others had their venue at the foot of the crying stone.
The community believes the stone has supernatural powers, fight with then in war and brought victory to them.  Folk tales has it that the Nandi Community warriors hunted to uproot the rock to win war against the luhya people. The tales further explicate that supernatural powers came out of the rock and destroyed them.
However the guards of the stone have developed illicit behaviors about money paid as entrance fees. They engage in furious argument on how to share the money earn from service offered among them. Vulnerable group like small school children from the locality within are often chased away if they are unable to raise the gate-pass fee. A reliable source said he visited the place and was shock with the usually entrance of Ksh 20 increased by 100% to Ksh 200. He was about to turn away the guards called him back
The crying stone is not a public resource it is a private facility. Private individuals take advantage of this to misuse it through exploit domestic tourists. The Nation and County governments need to protect this sight, making it a public utilization facility.  It publicity as a major tourist attraction sight alongside Kakamega forest in the western region should not be throw to the dogs.
By WANJALA B. DANSON