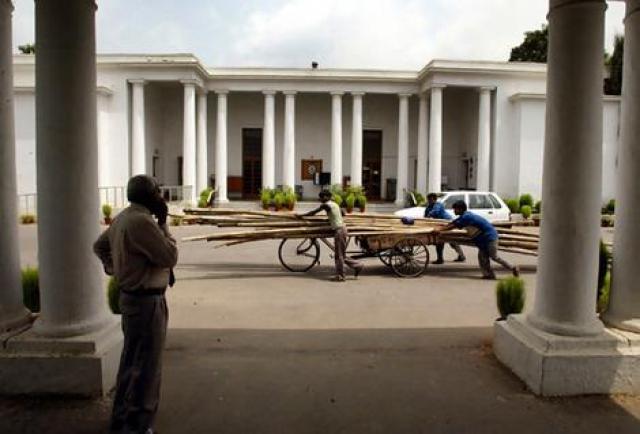 One election that I have been following because it has split over into the media is the elections to the colonial era Delhi Gymkhana club, an institution so exclusive that it carries a waiting list for membership that stretches to 33 years or so. The two contestants were the retired Army Chief, Gen. J.J.Singh and Air Marshal P.S.Ahluwalia. At the time of the electioneering both were serving soldiers and though the General has since retired, the Air Marshal continues to serve.

News of the campaign trickled into the media pretty regularly and at one point Gen. Singh is reported to have asked Air Marshal Ahluwalia if he would take on his own Chief for this election, were he a contestant to which the Air Marshal is reported to have said that he would. A deal was finally struck when it was agreed that the two year tenure of the president would be split and the two contestants signed a gentleman’s agreement that each would serve a year with Gen. Singh coming in first.

While one has to wait and watch, in this particular instance the agreement might work in this context because of the traditions of the elitist institution and the fact that both are service officers and the term “gentleman’s agreement” brokered into the deal draws on the Armed Forces tradition that an Officer is also a Gentleman, although even here, the tradition is getting increasingly diluted.

Witness the sordid drama of Karnataka where too such a gentlemen’s agreement had been in place between the JD(S) and the BJP that that the former would hand over the position of Chief Minister to the BJP on October 3rd. months before the date, apprehensions began to be expressed as to if his would happen and sure enough the date has come and gone and the transfer of power has not happened.

The gentleman’s agreement has gone sour though one could well perhaps argue that a situation where a supposedly secular party breaks its coalition with anther secular party (The Congress) to cozy up to a right leaning BJP should itself have led to doubts and questions at the very outset as to whether any of the parties concerned was being a gentleman in any sense of the word. Kumaraswamy, son of former prime minister and JD-S president H.D. Deve Gowda, forged an alliance with the BJP in February 2006 to bring down his own party’s coalition government with Congress. The reason he gave for rebelling against his father was his accusation that “the Congress was destroying the JD-S and hence there was no harm in joining hands with a party he and his father derided as "communal".

Since the Gentleman’s agreement is an unwritten agreement or transaction backed only by the integrity of the counterparty to actually abide by the terms of the agreement, the integrity of the parties is every thing and where the past record of any of the parties involved dredges up material which is questionable, then I suppose that it is reasonable to wonder if such agreements have any relevance in today’s day and age.

The only instance from the recent past where an unwritten agreement was entered into in the public domain and honored was in Jammu and Kashmir, where a similar power sharing agreement was entered into between the Peoples’ Democratic Party of Mufti Muhammad Sayeed and the Congress. Although there was much trepidation there too, as to whether the agreement would really work, when the time came though, the Mufti without any fanfare faded out after handing over power to the current chief Minister, Ghulam Nabi Azad.

The point here is that for a gentleman’s agreement to work, there need to be gentlemen in existence in the first place, whether it be in the Delhi Gymkhana or the State Secretariat. And sadly that species is endangered today and in likelihood of becoming extinct very soon.