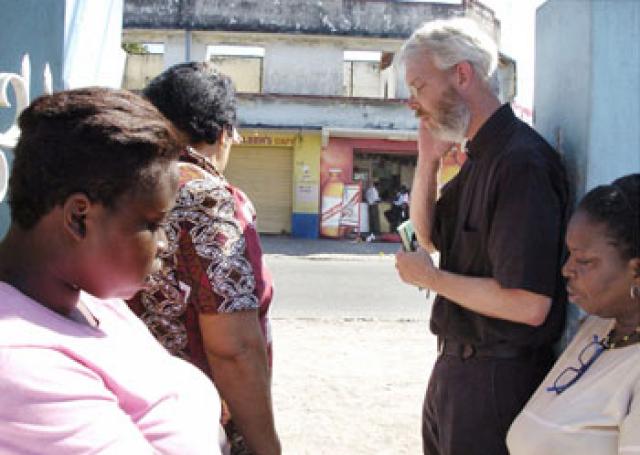 The embattled community of Waltham Park Road was the center of attention on Wednesday as 25-year-old Marlon Brown was brutally gun down.

Another unidentified man was also shot and seriously injured in the attack. The attack occurred during peak hour traffic and caused traffic to cease on the busy Waltham Park Road.

Tearful, members of the St Peter Claver Church, where Brown is said to be a member, at St Joseph Road, and other onlookers wept bitterly as they held an impromptu prayer service over the body.

Brown was gunned down meters from the church hall during early morning traffic. Brown is remembered as a good person by members of the church.

The attack came as no surprised as according to the St Andrew South police, a fight for gang control in the St Joseph’s Road community has resulted in four persons being murdered since Sunday.

The police say the leadership of a criminal outfit known as the Rat Bat Gang has ambitions of controlling the entire community of St Joseph’s Road and adjoining streets.

Their efforts to take control of the turf have, however, been thwarted by another gang based in the upper section of St Joseph’s Road. "Peace with guns in hand makes no sense. This has been a long-standing turf war in that area," said a cop at the Hunts Bay Criminal Investigation Branch.

The resistance forms the catalyst for a series of attacks, which has blown apart a peace deal brokered by warring factions some months ago.

As a result of the attack, students of the St Peter Claver Primary School were sent home as school personnel’s were forced to close school for the day. Early Wednesday afternoon, the school compound, which is usually abuzz with children at play, was eerily silent.

On Sunday morning Oniel Bryan, also called ‘Toughest’ was chased by gunmen along Waltham Park Road who sent him to an early crave. On Monday’s evening two Jamaicans who live in Scarborough, Canada, was gun down as they alighted from a vehicle with other family members on Omara Road. The two, 39-year-old barber Ainsley Coore also called ‘Cat’ and Christopher Lyons, 36, also tried to escape but their efforts was proven futile as they were chased and shot by the gunmen.

The police is searching for a man known only as ‘Nijah’ who is believed to be connection with the double murder.

No one knows who will be next, but one thing is certain that members of Waltham Park Road and adjoining communities is tired of the bloodshed and wants the gunmen to seize their operation.