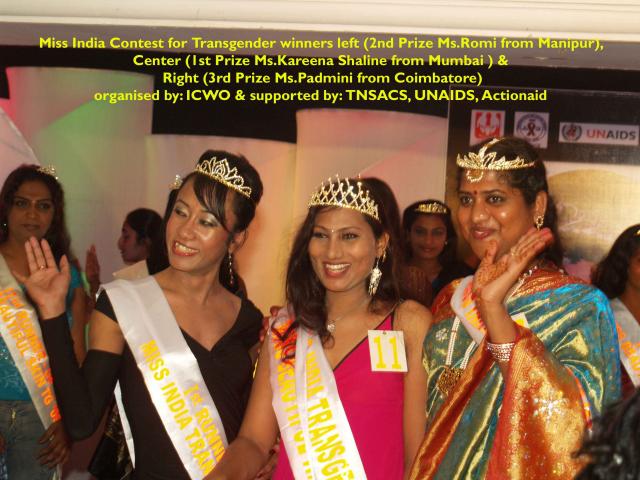 Kareena Shaline of Mumbai, Romi of Manipur and Padmini of Coimbatore, Tamilnadu were declared first, second and third at MISS INDIA contest for the Transgender Community held in Chennai on December 19, 2009.
In a well attended function, the Miss India title was awarded to the successful contestants by Ms. G. Jayalakshmi, Deputy Director, Women Welfare, Directorate of Social Welfare.
Around 800 Transgender community members and representatives working for transgender community across the country participated in the program. The event created an opportunity to discuss about stigma, discrimination, violence, marginalization, ill treatment, denial of treatment, privacy, quality of life, access to the medical facilitates for the Transgender Community.
Around 120 Transgender took part in the Miss India Contest. They represented different states like Tamil Nadu, Pondicherry, Kerala, Andhra Pradesh, Karnataka, Maharashtra, Madhya Pradesh, Uttar Pradesh, and Manipur.
Competitions were organized for Miss Beautiful Hair, Miss Beautiful Walk, Miss Beautiful Eyes, and Miss Best Skin. The Miss Beautiful Eyes Title was awarded by Ms. Yogini and Ms. Sanya, Cine Artists. Miss Beautiful Hair Title was awarded by Ms.Malaika, Miss Chennai Transgender and Ms. Jeyalakshmi, Cine Artist. Miss Beautiful Skin Title was awarded by Ms. Kavithalakshmi and Ms. Lavanya, Cine Artists.  The Miss Beautiful Walk Title was awarded by Mr. Kolangal Sreedhar and Mr. Kovai Babu, Cine Artists.
The contest was inaugurated by Mr. M. Ravi, Additional Commissioner of Police, Chennai, Mr. Alex Parimalam, Joint Director – IEC, Tamilnadu State AIDS Control society – TNSACS, Mr.A.Sathiyanaaraayanan, Consultant, Deputy Commissioner of Police (Retd) and Ms. Esther Mariaselvam, Program Manager, Actionaid India, Chennai Region.
Mr. M.Ravi, Additional Commissioner of Police, Chennai said he has no qualms in saying that the police department treats Transgenders badly and there is a need to change such attitude. He however cautioned that Trangenders should not create problems for the police.
Mr. Alex Parimalavan, Joint Director – IEC, Tamilnadu State AIDS Control society – TNSACS said that he do not approve the idea of beauty contest because it focuses on color and stature and secondly, they are conducted for commercial reasons. However beauty contest of transgender makes sense because they have beauty within and outside and such competition is not for commercial purposes.  It’s more relevant as many things could be achieved for them through such means.
“This program is happening today to create a National platform for discussing the issues and rights of the Transgnders. Transgenders have their rights for their housing, shelter provision of voter ID card, ration card and many other such rights. She pleaded that the rights of Transgenders should not be deprived and civic society need to work towards it,” said Esther Mariaselvam, Program Manager, Actionaid India,Chennai Region in her speech.
Mr.Sathiyanarayan, Consultant, Deputy Commissioner of Police ( Retd) said he felt very proud of participating in this program as he attended one such beauty contest in Villupuram in 1998 where Transgenders were abused.   Now what we see here is an acceptance of Transgender community by the civic society. He called for the formation of Transgender Self help groups and seek financial help from the government for their welfare.
Mr.A.J.Hariharan, Founder Secretary, ICWO, told that Awareness has been created with regards to attitudes concerning people with gender-atypical appearance or behavior also assumptions about transgender people’s sexual orientation, desire for surgical or hormonal treatment, or other aspects of their identity or transition plans awareness has been created. The lines of communication have been open with the transgender person among the general public. Information to the general public has been reached about the living status of Transgender and Educated on transgender issues.
The event was organized by Indian Community Welfare Organization (ICWO) a non profit, Non Governmental Organization and supported by TANSACS, UNAIDS and ACTIONAID. This event has also gained support groups from family, friends, and significant others of transgender people.  There was Release of Poster which was an important feature of the program.
—
Syed Ali Mujtaba is a working journalist based in Chennai.He can be contacted at syedalimujtaba@yahoo.com
Filed under: Lifestyle, Opinion
Share Tweet Pin G Plus Email
previous article: NFL 2009: Week 15 Preview: 24 Teams Vie For Postseason
next article: COLLEGE FOOTBALL: NEW MEXICO BOWL: WYOMING WINS