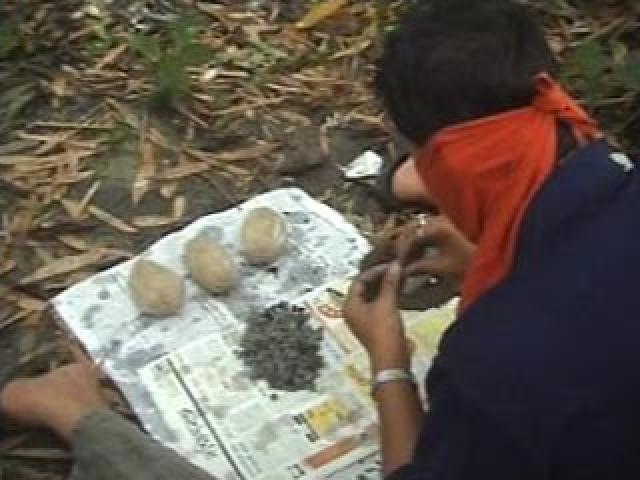 Nandigram simmers once again clash in which a CPM worker was killed. But it could get worse; TIMES NOW has an exclusive report on how bombs are being made and sent to the flashpoint areas in Nandigram.

The bomb-makers use a black material – a mixture of gun powder and  sharp pieces of iron. This mixture is then mixed with glass broken into small pieces and then packed in paper. Holding it all together is a long wrapping of jute strings.

"Our bombs are used by thieves and dacoits. But the bombs that we are now making are being sent to Nandigram. These bombs have been bought by some political leaders," said a bomb-maker.

Though they are crude bombs, they are packaged well. The consignments are sent out in cartons with each bomb fetching the bomb-makers 250 rupees.

The flourishing trade in crude bombs possesses a big danger in Nandigram, a place that resembled a war zone a few months ago over the government’s land acquisition policy.

Even the police admits that it is concerned over the smuggling of crude bombs into Nandigram. "We are aware of this. We do random raids but we have to beef up the security checks,” said Raj Kanojia, Inspector General (Law & Order), West Bengal Police.

Crude bombs can pose huge risks as a bomb disposal squad found out last September when one of its members was killed trying to diffuse a bomb. And with crude bombs being sold like coconuts, the danger has only multiplied.