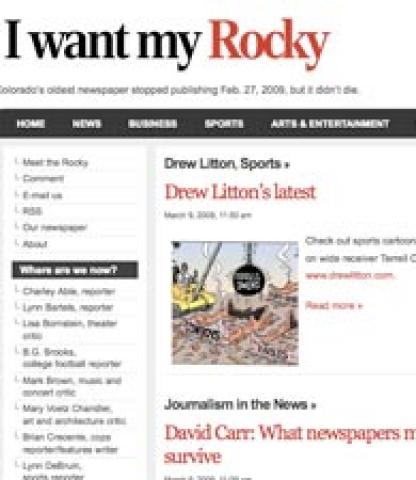 Rocky Mountain News published its final issue on Feb. 27, 2009, becoming the largest paper to succumb to the newspaper industry’s economic challenges and evolution to digital.

Wondering what had happened to the Rocky writers’ unpublished stories, NPR’s “On The Media” discovered that several of the writers were publishing their pieces on a site called I Want My Rocky, which was formed in December 2008 as a rallying cry to save the newspaper.

With the red, black and white color scheme of the newspaper, the blog has lately employed the tagline, “Colorado’s oldest newspaper stopped publishing Feb. 27, 2009, but it didn’t die.”

Read more about blogs, including how to find blogs of interest or start your own, with the findingDulcinea Web Guide to Blogs.
I Want My Rocky is an unprecedented project, and one of several experiments arising out of the newspaper industry’s troubles.

Newspaper publishers are pondering online-only offerings, paid online subscriptions, smaller staff and other innovative offerings. Many have already implemented one or several of them in an attempt to speak to the fact that, concurrent with the recession, advertisers and customers are moving online.

The past few months have seen some of the country’s most respected newspapers close, digitize their offerings or downsize.

In a pioneering move, The Christian Science Monitor announced in October that it would become an exclusively online newspaper by April 2009.

In December, the Tribune Company, which owns the Los Angeles Times, the Chicago Tribune, the Minneapolis Star-Tribune and others, filed for bankruptcy.

In early February, three Ohio newspapers announced that they would be eliminating their Tuesday issues in a cost-cutting effort.

On March 6, the Seattle Post-Intelligencer, owned by Hearst, announced that it would be following The Christian Science Monitor by going online-only, reports Paid Content. The P-I was put up for sale in January but was unable to find a buyer.

On March 9, McClatchy Newspapers, which owns The Miami Herald, Anchorage Daily News and Sacramento Bee, announced it would be cutting 1,600 jobs. This is McClatchy’s third round of job cuts since June 2008, reports the Reuters blog MediaFile.

Opinion & Analysis: What is the future of the newspaper industry?

The future of newspapers could lie in the nonprofit sector, as exemplified by ProPublica, a nonprofit investigative journalism project founded by Paul Steiger, a distinguished journalist and former editor of The Wall Street Journal.

More on the Newspaper Crisis

Investigative journalism is a necessary yet costly endeavor, argues ProPublica. As it explains on its site, “The business crisis in publishing and—not unrelated—the revolution in publishing technology are having a number of wide-ranging effects.” Among them, “‘investigative reporting’ is being squeezed down, and in some cases out.”

Newspapers must work together in order to survive, argues David Carr in a March 8 article in The New York Times. In Carr’s “fantasy meeting” between newspaper publishers, all would agree to abolish free content, stop giving “free rides” to news aggregators like Google News that are “repurposing” news content for their own means, “[t]hrow out” the Newspaper Preservation Act (“Does Seattle need two newspapers?”), and get rid of “commoditized” ads.

Giving customers more of what they want, including social networks and personalized and user-generated content, could be a boon for newspapers, suggests Olga Kharif in BusinessWeek. She mentions The Bakersfield Californian, which has been able to expand its online offerings by embracing social networking in the form of Bakotopia, designed to reach young people. Kharif also mentions “micropayments, hyperlocal Web sites, and publications designed for e-readers” as projects that newspaper publishers are exploring.